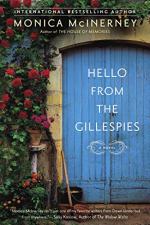 Monica McInerney
This Study Guide consists of approximately 90 pages of chapter summaries, quotes, character analysis, themes, and more - everything you need to sharpen your knowledge of Hello From the Gillespies.

Hello From the Gillespies Summary & Study Guide includes comprehensive information and analysis to help you understand the book. This study guide contains the following sections:

This detailed literature summary also contains Quotes and a Free Quiz on Hello From the Gillespies by Monica McInerney.

No matter how irritating they may be, the love of family members for one another can overcome all obstacles. This long-suffering love of family is explored in the novel “Hello From the Gillespies” by Monica McInerney. A ranting letter accidentally sent out by the Gillespie family instead of its typical Christmas greetings gave neighbors an unexpected glimpse into the troubles being faced by a family everyone had always thought was perfect. The letter also shook up relationships between the seven members of the family. Even as the family struggled with the aftermath of the letter, and then later nursed Angela through memory loss after a serious car wreck, they sometimes lost their patience with each other but never lost their love. This novel gives a look into the intricacies of family life and the way one family’s love for its members helped it to overcome tough times.

Although Angela usually enjoyed writing her family’s Christmas letter, this year she struggled to present a positive picture. As a release she decided to take her friend Joan’s advice and write the truth. She had just finished with her ranting letter about her children’s failures, her husband’s sudden distance from her and her own fantasy life when her son Ig accidentally cut off part of his finger with a carving knife. In her rush to care for Ig, Angela left the letter on the computer screen where her husband saw it and sent it out to his wife’s Christmas email list, believing he was doing her a favor. As Angela’s family members learned about the letter and what had been written about them, they each reacted in different ways. After the children initially blew up at their mother, they recovered from their anger and realized she had written the truth about them. Angela’s husband Nick, however, grew even more distant.

Because she’d been having painful headaches, Angela traveled to Adelaide to see a specialist just after Christmas. While there she decided to drive to a lookout point that Nick had taken her to just a few days before their wedding. As she drove, Angela was frightened by a huge spider that crawled across the inside of her windshield. She screamed and took her hands off the wheel, allowing her car to careen into a tree. When Angela finally regained consciousness several days later doctors discovered she was suffering from memory loss. She believed the fantasy life she’d written about in her ranting letter was her real life. In her fantasy she, her husband and daughter were going to vacation on Errigal, the sheep station where Angela actually lived with her family.

When she was physically able, Angela went to Errigal believing she was a guest. Her family treated her as they would one of the visitors who often visited their station for vacations. As Angela began to get to know her family on a different level, she found herself fantasizing about Nick, her real life husband. It was Celia, the no nonsense, interfering aunt who finally decided she’d had enough of Angela being coddled as a guest. Hoping to spark Angela’s memory, Celia left a folder with all of the Gillespie Christmas letters that Angela had written over the past 33 years on Angela’s bedside table. The letters seemed to work as Angela asked Ig the next day if she was his mother.

On the computer, Angela found an email Nick had written to her just before her accident that she had never read. In it he explained the huge debt the family was facing as well as his belief that he was a failure because he hadn’t been able to keep the sheep station running. In this email he suggested he and Angela make a new start in a house by the sea. When he walked into the office to find her looking at real estate site for a house by the sea, he knew his wife had not only regained her memory but also that she had forgiven him for the distance that he had allowed to develop between them.

More summaries and resources for teaching or studying Hello From the Gillespies.

Hello From the Gillespies from BookRags. (c)2022 BookRags, Inc. All rights reserved.