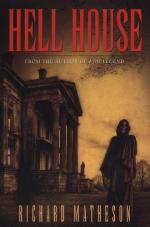 Richard Matheson
This Study Guide consists of approximately 47 pages of chapter summaries, quotes, character analysis, themes, and more - everything you need to sharpen your knowledge of Hell House.

This detailed literature summary also contains Topics for Discussion and a Free Quiz on Hell House by Richard Matheson.

Hell House by Richard Matheson is a story that takes four very different people into a house that has a life of it's own. After sitting empty and boarded up by the owners for thirty years, Rolf Rudolph Deutsch wants a small group of hand selected experts from several unique fields of study to go into the house and stay for one week. With the promise of great renumeration, all he asks in return is that they answer definitively the one question he has: Is there life after death? Close to death himself, Deutsch needs to know. In fact, he is consumed with the need to have that one question answered. In return for his money, he wants to know definitively if anything lives in the Belasco house in Maine dubbed Hell House.

Dr. Barrett is the first one summoned and he is unable to turn down the offer of $100,000. He agrees to go to Hell House with a couple of stipulations: Deutsch is to finance the completion of a machine Dr. Barrett created and calls a Reversor and his wife is to join him. Deutsch happily agrees and tells the doctor that he will be joined by a spiritualist and a medium - Benjamin Fischer, the lone survivor of the last encounter with Hell House.

Aptly named, the house is full of surprises for its newest troupe. Before one seemingly simple week is over, two of the professionals will die and the two that survive will come very close to losing their lives on more than one occasion. The house is haunted by Emeric Belasco who evades the removal of his temporal spirit by way of Dr. Barrett's Reversor because his remains are sealed in a lead walled room behind the alter in his chapel. Emeric returns after the house has supposedly been cleansed, and takes Dr. Barrett's life, but not before he reveals himself just as he had to Reverend Florence Tanner before him. Invading the minds of all who enter his house, Emeric forces acts of sexual perversion on his victims, possessing their spirits and breaking them, one by one.

In the end, it is former guest and world renowned Medium Benjamin Fischer and Edith Barrett who unravel the truth and put Emeric Belasco in his place. Only they see him for the pathetic little man he was, and understand why he felt the need to terrorize. A defense against his own feelings of inadequacy, Emeric is finally confronted and silenced forever. Sadly, Rolf Deutsch will never know any of this as he dies before knowing were is life after death before finding his way there himself.

More summaries and resources for teaching or studying Hell House.