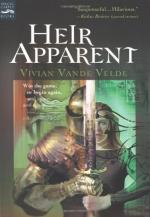 Vivian Vande Velde
This Study Guide consists of approximately 52 pages of chapter summaries, quotes, character analysis, themes, and more - everything you need to sharpen your knowledge of Heir Apparent.

Heir Apparent by Vivian Vande Velde is a story about a girl named Gianinne Bellisario who is celebrating her fourteenth birthday. Her father gives her a gift certificate to Rasmussem Gaming Center and she decides to use it to become a character in game called 'Heir Apparent'. While she is connected to the game, the Center is invaded by a protest group called C.P.O.C. and the equipment damaged. The usual methods of exiting the game are no longer available and the only way that she can get out again is to complete the game. There is a limited amount of time that she has to accomplish this after which she will likely never recover completely. If she dies in the game, she simple feels a fizzy feeling and finds herself back at the beginning again.

Gaininne becomes Janine, a girl who discovers that she is heir to the throne by decree of her father King Cynric. She has spent her entire life living with sheep herders in the small town of St. Jehan, in hiding when her safety could no longer be guaranteed in the castle. She is never out of his mind however, and when he falls ill, not trusting anyone around him, he asks that she be named his heir. Sir Deming rides out to St. Jehan to get her, and as the game begins, Janine is waking on the hill to her mother calling her down. Janine returns to this hillside several times as one or another of her half brothers eliminate her from the throne. In a momentary visitation, Nigel Rasmussem manages to get a message to her emphasizing the need for a ring and letting her know what happened. Before her game is done, Janine will face a barbarian invasion, civil unrest, an obnoxious queen and her three traitorous sons, a dragon, and three magic users - each with different skills. She'll be put to the test in many ways as she must recover a crown from a dragon; stop an adviser from robbing the city blind; and earn the respect of the royal guard. Janine will lose her life several times in a bid to get to the end of the level in time. Princess Janine applies a moral and unflinching loyalty to her royal duties, hauling arrows to her guards when the barbarians attack. She refuses to give in to extortionist demands; ensuring her guards are well paid and appreciated and listening to the people around her. She also takes on the dangerous task of retrieving the Crown of King Brecc the Slayer. She is tried at every turn. Will she make it out to her life again? Will she be consigned to a virtual reality? The book ends with open-ended questions that remain unresolved and are intriguing to the reader.

More summaries and resources for teaching or studying Heir Apparent.