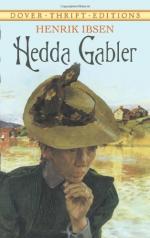 Madame Bovary (1857), by Gustave Flaubert, is one of the important early works of French realism. The novel offers a brilliant and fairly sympathetic portrait of a shrewd and ambitious woman who attempts to better her circumstances by marrying and manipulating a country physician.

The Awakening (1899), Kate Chopin's long neglected novel of feminine self-consciousness offers a portrait of a woman defying conventional morality, including marital fidelity and taboos against miscegenation.

Margaret Fleming (1890), by James A. Herne, is the first genuinely realistic play in America.Although now considered sentimental, it depicts a woman who defies convention in undertaking to care for the illegitimate child of her husband.

The Quintessence of Ibsenism (1913) may be more about George Bernard Shaw, its author, than it is about Ibsen...