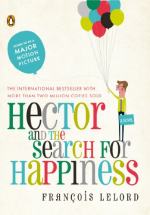 Hector and the Search for Happiness Summary & Study Guide

Francois Lelord
This Study Guide consists of approximately 98 pages of chapter summaries, quotes, character analysis, themes, and more - everything you need to sharpen your knowledge of Hector and the Search for Happiness.

Hector and the Search for Happiness Summary & Study Guide Description

Hector and the Search for Happiness Summary & Study Guide includes comprehensive information and analysis to help you understand the book. This study guide contains the following sections:

This detailed literature summary also contains Quotes and a Free Quiz on Hector and the Search for Happiness by Francois Lelord.

"Hector and the Search for Happiness" starts with the main character, Hector, lamenting about his current state of life. He is a successful psychiatrist in a wealthy European city. He has many clients and does not want for anything, really, except to make his clients more permanently happy. Hector is considerably conflicted about the fact that with all of his psychotherapy, regular psychiatrist tricks, medication prescriptions, and appropriately-decorated psychiatrist office, his patients - who are also wealthy and materially want for nothing - remain so unhappy. Hector decides to go on holiday (vacation) around the world to different countries so he can see what contributes to people's happiness and their unhappiness.

Hector invites his long-time girlfriend Clara to join him on his trip, but she declines. Clara is an independent woman who has a high position with her pharmaceutical company coming up with names for new medications. Hector's interaction with Clara when he asks her to join him is an emotionally-charged one because Clara thinks when Hector asks her if she's happy, he's alluding to the fact that he's going to break up with her. That's not the case, but she still declines the offer to join him on his trip.

Hector starts his journey in China where he has an old friend who works very hard and has a lot of money. On the plane-ride to China Hector meets Charles, the first of many people he meets on his journey. The two are sitting in business class; Hector is happy with this, but Charles is not because he has previously sat in first class. Hector learns his first happiness lesson with Charles, as Hector notices that making comparisons can ruin someone's happiness. Once he arrives in China, Hector enjoys dinner with his old friend Edouard, a successful businessman who is in the banking industry. The two drink some wine at dinner, then Edouard takes Hector to a dark, quiet bar, where Hector meets Ying Li. Though he is in love with, and in a relationship with, Clara back home, Hector becomes enamored with Ying Li. He is enthralled by their conversation and doesn't think twice about it when she comes up to his hotel room and they engage in intercourse. The next morning, however, Hector finds out that she's an escort, and his joy from the experience is dampened.

Hector spends that day walking by himself and traveling by train up a nearby mountain. At the top of the mountain he sees a sign for the Tsu Lin Monastery, at which he meets the old monk. Hector and the old monk share a deep conversation about religion and happiness. Hector wants the old monk to share the secret to happiness, since the old monk is obviously well settled and contented with himself. However, the old monk instead asks Hector to come back at the end of his journey. Feeling lighter, Hector goes back down the mountain and has dinner with Edouard in a cafe outside of Edouard's office building. Here, Hector observes many happy and unhappy people and decides that if he wanted to open a psychiatry office in Hector's office building, he would probably do very well because of all the people who leave the building looking miserable. Still while in China, Hector has a second encounter with Ying Li. It's less joyful than the first time, but far more intense.

After his time in China, Hector goes to Africa. On the airplane ride to Africa Hector meets Marie-Louise, a woman who lives in America but is traveling back to her home country. The two talk about psychiatry, since she is a psychiatrist also. Marie-Louise invites Hector to her family's home while he's staying Africa. Once off the plane, Hector meets up with his host for this country: Jean-Michel, a friend from long ago. Jean-Michel teaches Hector about some general living in Africa, including the fact that they need a bodyguard just for everyday protection. At the bar at his hotel, Hector meets Isidore the barman and Eduardo the drug dealer, with whom he becomes regular friends. Hector learns a little bit about the drug-dealing industry from Eduardo, and Hector gives Eduardo the name of a medication for his depressed wife to try, since her current medication isn't working.

Hector enjoys a dinner at Marie-Louise's family's house. They discuss the country, happiness, Hector's investigation, and family matters. After drinking more alcohol than usual, Hector takes a car with chauffeur and bodyguard back to his hotel. However, Hector falls asleep and when he wakes up realizes he's been accidentally kidnapped by two criminals who thought they were just stealing the car. The two criminals bring Hector back to their boss, who stays in a nice house with fine things and beautiful women. They lock Hector in a storeroom while they debate what to do with Hector. After Hector slips them a note telling them they should talk, he tells the criminals that he knows Eduardo the powerful drug dealer (and hasn't gone to the police). After learning this and sharing his notebook filled with lessons in happiness with the criminal boss, Hector is let go scotch-free. Upon arriving back at Marie-Louise's family's house, they throw him a party for the mere fact that he survived a kidnapping.

Hector then travels to America, the country of More, as he calls it. (America is never specifically named, but the reader can assume it's America based on Hector's and the narrator's descriptions of the culture and environment). Hector is looking forward to meeting with a professor of Happiness Studies at a university. He travels first class so as to celebrate the fact that he's still alive. On the airplane ride to America Hector meets Djamila, an ill woman whom Hector helps to calm down when she panics because she has a very strong headache. He brings her back to first class with him where she can recline and be comfortable. He also requests from the pilot that the plane be flown about 1,000 feet lower in an effort to help Djamila feel less pressure on her head. The two enjoy their conversation and Hector is successful in helping to bring down Djamila's anxiety level while flying. Eventually, she falls peacefully asleep and Hector enjoys the rest of the plane ride to America.

Once in America, Djamila is exited from the aircraft and escorted away by two men in white coats. Hector is picked up from the airport by his former girlfriend, now good friend, Agnes, who scolds him for helping Djamila without the proper legal protection. Hector meets Agnes's husband Alan and her two children. They live in a wealthy part of town near the water. Context clues let the reader know that it's the West coast of America. Before going to the university with Agnes a couple days after arriving in America, Hector enjoys a solo walk through Agnes's town and also down the white sandy beach near her home.

Alan and Agnes help Hector the night before he meets with the professor to categorize his lessons in happiness. Hector feels prepared yet still nervous to meet the important professor, to which the professor is referred by Hector. Fortunately, upon meeting the professor, the two hit it off well and have a positive interaction. The professor is excited to talk to Hector and validates all of Hector's informal research into the topic of happiness. He explains his own research, that of his colleagues, and the way Happiness Studies has progressed over the last several years since it has begun being studied. When the professor goes through the process of explaining how to measure happiness and shows Hector his quantitative research involving brain scans, Hector is again elated at his own work and his own lessons being validated.

Hector goes back to China before heading back to his home country so that he can meet with the old monk at the Tsu Lin Monastery. Hector shows his notebook filled with the happiness lessons he's learned along the way, 23 in all, to the monk as they sit in the monk's office and admire the beautiful scenery outside the office window. The old monk validates Hector's work, just as the professor does, by congratulating him for the lessons he's learned. Hector is pleased with his work, his trip, and himself.

Upon returning to his home country, Hector is renewed and refreshed. He approaches his clients with a new perspective and even though he knows that for many of his clients the treatment will remain the same, for some he can introduce a new way of asking questions so as to cause them to think about their own happiness. Some of the other major character's end-story is explained, as well: Edouard quits his job before making $6 million dollars so he can help poor people find money for education and basic needs; Jean-Michel, Agnes, Alan, and the professor continue their work; Djamila passes away; and Ying Li stops working for the escort service and begins working for Edouard, where she meets a young man her age with whom she falls in love, marries, and has a child. As part of his refreshed perspective on life, Hector decides that he is truly in love with Clara and decides that someday, he'd like to marry her, live happily, and raise children with her.

More summaries and resources for teaching or studying Hector and the Search for Happiness.

Hector and the Search for Happiness from BookRags. (c)2022 BookRags, Inc. All rights reserved.