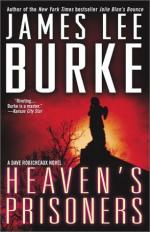 James Lee Burke
This Study Guide consists of approximately 37 pages of chapter summaries, quotes, character analysis, themes, and more - everything you need to sharpen your knowledge of Heaven's Prisoners.

This detailed literature summary also contains Topics for Discussion and a Free Quiz on Heaven's Prisoners by James Lee Burke.

Dave Robicheaux and his wife Annie inadvertently become involved in a underworld power struggle when the witness a small plane crash and rescue a young orphaned girl from the wreck. They take the girl home and Dave sparks the ire of an unknown criminal boss when he asks questions about the cause of the plane wreck. The situation spirals out of control and results in the murder of Annie during an attempted hit on Dave. Dave investigates as the criminals turn on each other until only one is left—whom Dave then arrests for murder.

Dave and Annie are fishing when they witness a small plane crash into the water. Dave dives down to the wreck and rescues Alafair, a young illegal immigrant who he immediately decides to adopt as his own—outside of official channels. Realizing that the plane was brought down by an explosion, Dave—an ex-cop—begins to investigate. He is told by law enforcement authorities to mind his own business but ignores their advice. He is then beaten by local thugs, a clear message that he shouldn't poke his nose into other people's business. Annie begs Dave to leave well-enough alone, but he is incapable of walking away from insult. Dave tracks down one of his assailants and beats the man up in retaliation. A few days later, the man and an accomplice break into Dave's house and murder Annie while looking for Dave.

Dave responds by joining the local police force and actively investigating his wife's murder. First one and then another of his assailants turn up dead in ways that somewhat implicate Dave. Dave pursues his investigation as his friends beg him to stop endangering his life. During this stressful period Dave briefly returns to his alcoholic ways to help him deal with his grief and rage; he also takes in an ex-prostitute as a lover and housekeeper. Dave finally tracks down the man who killed his wife and in a brief but violent encounter shoots him dead.

Acting on an intuitive understanding of the local criminal paradigm, Dave deduces that the local crime lord's wife has been the motive power behind the various events. Confronting the local crime lord—also a childhood friend—Dave spells out the man's wife's betrayal. The man responds by beating his wife in public—an entirely inadequate control over the ambitious and amoral woman. She responds by murdering her husband, an action anticipated by Dave who is on the spot to make the final arrest. The situation thus satisfied, Dave quits the police force and returns to his life. As his ex-prostitute lover moves on, Dave pieces back together his former existence as a retired cop and bait shop operator.

More summaries and resources for teaching or studying Heaven's Prisoners.