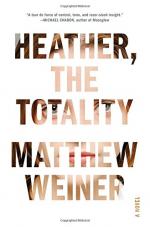 This detailed literature summary also contains Quotes and a Free Quiz on Heather, the Totality by Matthew Weiner.

The following version of this book was used to create this study guide: Weiner, Matthew. Heather, The Totality. Canongate, 2017. Kindle AZW file.

Heather, The Totality tells the story of Mark and Karen Breakstone, their daughter Heather, and their elite Manhattan lifestyle, and the way their lives are forever altered by a chance encounter with a psychologically disturbed construction worker named Bobby Klasky.

Chapter One tells the backstory of Mark and Karen’s relationship as well as recounting the early years of Bobby and Heather’s respective childhoods. Mark and Karen were setup by mutual friends. Although Karen was initially disappointed in Mark’s looks she was won over by his sense of humor and potential to make a lot of money. Mark and Karen got married and moved to Park Avenue after discovering that Karen was pregnant. After the birth of their daughter Heather, Karen quit work and started looking after Heather full time, devoting all of her time and emotional energy to raising her daughter. Bobby Klasky was born in Newark, New Jersey and his mother was a drug addict. Bobby was subjected to violence by friends of his mother as a child.

In Chapter Two, Mark grew frustrated that Karen’s over-controlling attitude towards raising Heather left him feeling isolated within the family. Heather grew into an unusually empathetic child and strangers would often comment on her beauty. Mark grew preoccupied with fantasies about a coworker. He argued with Karen about never getting to spend any time with Heather. In Newark, Bobby, now an adult, violently assaulted a female neighbor and was sentenced to three years in prison.

In Chapter Three, Heather had reached puberty. Mark and Heather began a morning coffee ritual together but Karen interfered by buying a coffee machine that only she could use. Major renovation work began on their apartment building but the family decided to continue living there throughout the work. In Newark, Bobby was released from prison. After being beaten and robbed by his mother’s boyfriend, Bobby drugged his mother and set fire to the house with her inside. Bobby convinced the police that the boyfriend was responsible. With the help of his parole officer he moved to a new town and got a job on a construction crew doing work in Manhattan. One day at work, Bobby encountered Heather and began planning to rape and murder her.

In Chapter Four, Mark noticed a construction worker staring at Heather and was convinced that he intended to harm her. Mark told Karen of his fears but she did not believe him and accused him of being jealous of the idea of losing Heather to another man. Mark became obsessed with thoughts of murdering the construction worker. Heather noticed the worker staring at her and, although she was initially annoyed, she ended up feeling flattered by the attention and resolved to speak to him. One day while he was at work, Heather asked Bobby if her mother was home yet and he interpreted the question as an invitation to have sex with her.

In Chapter Five, Mark encountered Bobby alone in the lobby of their apartment building and asked him to help him move something in his apartment. Bobby agreed. Mark pushed Bobby out of an open window in the kitchen and he fell to his death. Mark confessed to Karen who convinced him to carry on as if nothing had happened. The next day, Bobby’s body was found. An inquest ruled that his death was a workplace accident. Heather left a bunch of flowers where the body was found and Mark and Karen listed the apartment for sale.