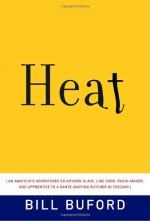 Bill Buford
This Study Guide consists of approximately 27 pages of chapter summaries, quotes, character analysis, themes, and more - everything you need to sharpen your knowledge of Heat.

Heat: An Amateur's Adventures as Kitchen Slave, Line Cook, Pasta Maker, and Apprentice to a Dante-quoting Butcher in T Summary & Study Guide includes comprehensive information and analysis to help you understand the book. This study guide contains the following sections:

This detailed literature summary also contains Topics for Discussion and a Free Quiz on Heat: An Amateur's Adventures as Kitchen Slave, Line Cook, Pasta Maker, and Apprentice to a Dante-quoting Butcher in T by Bill Buford.

Heat: An Amateur's Adventures as Kitchen Slave, Line Cook, Pasta-Maker, and Apprentice to a Dante-Quoting Butcher in Tuscany is a funny memoir by The New Yorker writer Bill Buford. In this book, Bill describes his experiences working both in the kitchen of famous New York restaurant Babbo and as an apprentice butcher in Tuscany. Bill suffers burns, cuts, and humiliation in his attempts to learn to cook authentic Italian food, only to realize he was not ready to use this knowledge to do more than cook the occasional meal at home. Heat is a memoir but it is also the description of a love affair between one middle-aged man and the history and pleasure of authentic Italian food.

Bill Buford invites famous chef Mario Batali to dinner one night only to have Batali take over the kitchen and effortlessly make an exciting meal with ingredients he brought himself. Not long after this night, Bill convinces Mario to give him an opportunity to learn in the kitchen of his restaurant, Babbo. Mario agrees and soon Bill finds himself learning that everything he had thought he knew about cooking is wrong. Bill begins in the preparation kitchen, working with Elisa preparing all the food that would be necessary for the cooks to prepare that night during working hours. Bill cuts up meat and vegetables, prepares broths and sauces, and find himself working harder than he ever had before. On top of it all, he is unpaid.

Bill plans on working his way through the kitchen much like Mario Batali had done himself. Batali never wanted to be a cook, even though his passion even as a child was cooking. It was not until Batali took a job in California working in a small pizzeria that he decided to take cooking classes. Batali enrolled in the Cordon Bleu in London. From there, Batali returned to California where he became a chef at a hotel restaurant and was offered a kitchen of his own, but Batali refused. Instead, Batali returned to Europe where he worked in a pub under chef Marco Pierre White. White was tough to work for, often throwing tantrums, causing Batali to quit and move on. Batali wanted to learn Italian cooking from real Italian cooks. So he took a position in the kitchen of La Volta in the town of Porretta Terme, Italy. Eventually Batali would return to New York and open his first restaurant, Po. Unfortunately, a falling out with his partner would end with the partner buying Batali out and leaving him free to move on, to open Babbo.

Bill too wants to move on. Bill convinces Batali to move him up to the line cook. Bill begins on the grill, cooking the meat as it is ordered. The first few nights are a disaster, but Bill eventually catches on to the rhythm and is able to keep up with the orders. After a time, Bill wants to move on to learn pasta making. Batali agrees to move Bill to the pasta station but demands that he first return to the prep kitchen in order to learn how the pasta is made. When Bill moves to the pasta station after learning to make the pasta, he discovers that it is not only harder than he had originally assumed, but that it is also a hot job. Bill works over boiling water all night and he has to remember what sauces and ingredients go with what pasta.

Kitchen politics lead to a change in employees. Bill is moved back to the grill where he is tested by the new expediter or the man whose role it is to make sure all the correct orders are made, plated, and sent out to the customers. Bill survives this test, but finds the stress in the kitchen difficult to deal with. Eventually, Bill decides that he wanted to go to Italy to learn as Batali did from the kitchen of a true Italian cook. Bill arranges to become an apprentice in the kitchen of Betta, the previous cook of La Volta.

Betta teaches Bill how to make a variety of pastas, including a tortellini that her family had traditionally made every Christmas. From Betta, Bill learns a lot about pasta, but he also learns about the essentials of cooking in Italy using the ingredients that are readily available and often going for months at a time eating the same thing day in and day out.

After leaving Betta's kitchen, Bill decides that he wants to be an apprentice to a butcher in Tuscany because Batali's father has apprenticed under the same butcher and because it seems like something a proper Italian cook should learn to do. Bill gets permission to begin working in the butcher shop of Dario Cecchini who is the most famous butcher in Tuscany. At first Bill is convinced he will never learn how to cut meat because Dario has restricted him to making jams, jellies, and sauces. However, just days before leaving Tuscany to return to New York, the maestro who taught Dario and works in his shop teaches Bill how to butcher a pig.

Upon his return to New York, Bill decides to buy a pig so that he can continue practicing his technique. Bill buys a pig from a friend and finds himself receiving dirty looks for carrying the carcass through a farmer's market and into his apartment building. Once home, Bill is able to carve the pig into so many pieces and make so many meals that he and his wife quickly became tired of pork.

Bill returns to Tuscany and is taught how to carve the meat from a cow carcass. Bill finds this task to be much more difficult than he had ever imagined, but he also learns a great deal about carving a cow, the differences in cow breeds, and the use of the cows while they are living that affect the different cuts of meat. Bill also has the opportunity to see some of the traditional and beloved cows of the region on the farm of an acquaintance.

Eventually Bill returns to New York with the gift of all the knowledge he learned both in Babbo's kitchen and in Italy. During dinner with Mario one night, Bill finds himself drinking and eating much more than he could have imagined doing before his adventures in Italian cooking. When Batali asks Bill if he is going to open a restaurant with all his new knowledge, Bill realizes that he is not ready.

More summaries and resources for teaching or studying Heat: An Amateur's Adventures as Kitchen Slave, Line Cook, Pasta Maker, and Apprentice to a Dante-quoting Butcher in T.