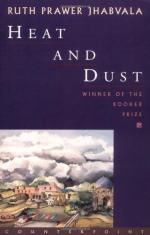 This detailed literature summary also contains Topics for Discussion and a Free Quiz on Heat and Dust by Ruth Prawer Jhabvala.

A young English woman goes to India to reconstruct the life of Olivia, her grandfather's first wife. Olivia had married Douglas in England some 50 years earlier and moved with him to Satipur, India. After she first met the Nawab—at a dinner party at his palace in Khatm—she was certain he would, within the week, visit her in Satipur. She was correct (he arrived with his full retinue and stayed the day). It was after that first visit she began writing Marcia.

Olivia and the Nawab first become friends and then lovers. When she realized she was pregnant, she told the Nawab and then her husband Douglas and she had the Begum, the Nawab's mother, arrange an abortion. Following the abortion, she went directly to the palace in Khatm and the Nawab later purchased and maintained a house for her in X, a small village in the steep foothills of the Himalayas (he never spoke of her again publicly). Olivia died in the 1950s, a few years after the Nawab, a quarter century before the narrator arrived in India. Against British custom, Olivia had also had her body cremated and her ashes spread on the mountainside.

The young woman who came to India to discover more about Olivia is the narrator—neither her name nor the exact year she arrived are ever stated. She takes a room in Satipur and visits the house in which Olivia and Douglas had lived (it had been subdivided into several government offices, in one of which Inder Lal, her new landlord, works). She first visited the Nawab's palace with Inder Lal. She first visited the shrine of Baba Firdau on the day of an annual fertility festival (the "Husband's Wedding Day"), with Inder Lal's mother and her friends. When she subsequently visits the shrine with Inder Lal, the two become lovers (near the spot where Olivia and the Nawab had become lovers in 1923). The midwives in Satipur can tell the narrator is pregnant before she herself realizes it. The novel concludes with the narrator, whose choice is to carry her child to term, having arrived in X (she has taken a room; she has stood inside Olivia's house). The narrator has heard there is an ashram further up the mountain although she does not know how long she will stay, she says she rarely looks down.