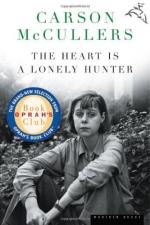 The Heart Is a Lonely Hunter - Part 1, Chapter 2 Summary & Analysis

In the early hours of a Sunday morning, Biff Brannon looks out over his customers at the New York Café. John Singer is there, a regular customer since Spiro left, but the most obvious character is Jake Blount, a boisterous drunk that extends his credit with each drink. Alice, Biff's wife, has warned him that if Jake isn't gone by tomorrow, Biff should pack his things and go. She is weary of this life and her marriage and is in no mood to suffer this fool any longer.

Fourteen-year old Mick Kelly struts in out of the blue. No one seems...