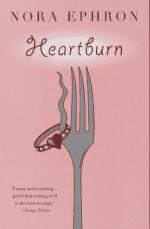 Nora Ephron
This Study Guide consists of approximately 40 pages of chapter summaries, quotes, character analysis, themes, and more - everything you need to sharpen your knowledge of Heartburn.

This detailed literature summary also contains Topics for Discussion and a Free Quiz on Heartburn by Nora Ephron.

Heartburn, by Nora Ephron, is a novel based on six weeks in the life of Rachel Samstat. Rachel is married to Mark Feldman and they have a two-year-old son, with another child on the way. At seven months pregnant, Rachel learns that her husband is in love with another woman. Heartburn is Rachel's narrative of the events that follow this revelation.

Rachel Samstat is stunned to learn that her husband Mark is involved with another woman. The fact that she learns this after reading a loving inscription in a book, an inscription which mentions her son, is just another blow. Confronting Mark, Rachel is devastated when Mark tells her that he loves Thelma Rice, and that he believes Rachel to be a nag and a shrew. Despite this, Mark expects Rachel to stay with him, as they have a son and are expecting another baby. Rachel flees to New York, seeking a different place to think things through.

Rachel's life continues, despite her feelings that the world has stopped. In New York Rachel visits her old therapy group, reconnecting yet embarrassed because of her marriage crisis. A robbery takes place during which the ring that Mark gave her when their son was born is stolen. Rachel wonders if this is a sign. She wonders this aloud when Mark finally arrives in New York to ask her to come home. Rachel does return home, hoping that her husband is telling the truth when he says he will not see Thelma again.

Rachel's life continues, though she constantly questions herself about what she wants and what she expects. Samstat has a self-esteem issue, and seems to need to be married, a fact that is evident when she tries to imagine herself married to every man she meets. Rachel tries to work on her marriage, speaking to her closest friends about her situation, comparing her marital crisis to theirs and asking advice.

Events come to a head when Rachel tracks Mark to Thelma's house after finding more evidence that they are still serious about each other. A freak fall leads to early labor and Rachel delivers her second son early. After her recovery another discovery pushes her over the edge. Mark had purchased a necklace for Thelma while Rachel was in the hospital recovering from the birth.

Rachel tries to become the woman that Mark says she is not, and struggles throughout the novel to be what her husband wants. Events lead Rachel to finally discover that she is the woman she has always been, and Mark has changed. Throwing a pie at Mark at a dinner party is Rachel's statement that things will never be the same. Unwilling to wait for her husband to love her again, for the chance to return to something that she is unsure she wants, Rachel decides to step away, and to once again be her own person, rather than the person that others expect her to be.

More summaries and resources for teaching or studying Heartburn.