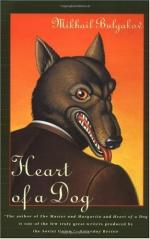 Mikhail Bulgakov
This Study Guide consists of approximately 32 pages of chapter summaries, quotes, character analysis, themes, and more - everything you need to sharpen your knowledge of Heart of a Dog.

Heart of a Dog Summary & Study Guide includes comprehensive information and analysis to help you understand the book. This study guide contains the following sections:

This detailed literature summary also contains Topics for Discussion on Heart of a Dog by Mikhail Bulgakov.

This guide was created using the following version of this book: Bulgakov, Mikhail. Heart of a Dog. Translated by Mirra Ginsburg. New York: Grove Press, 1968.

The novel opens on the streets of Moscow in winter. A stray dog shivers in the wind and thinks woefully of its current situation. However, fortunately for the dog, a man passes by and decides to take it home. The man is Philip Philippovich Preobrezhensky, a renowned physician. Philip names the dog Sharik, and Sharik lives happily in Philip's luxurious apartment. Sharik observes Philip, who appears to staunchly disagree with the operations of the Soviet government.

Sharik is not aware that Philip intends to surgically replace Sharik's testicles and pituitary gland with those of a human in order to determine if such a procedure could be viable for a human. Philip eventually performs the operation with the help of his medical associate, Dr. Bormenthal. Sharik recovers from the operation and soon becomes fully anthropomorphized and gains the ability to speak. Philip is excited at first but is disappointed to observe Sharik's personality develop as generally boorish. Moreover, Sharik quickly becomes a supporter of communism and the Soviet Union.

Sharik becomes a registered citizen and takes the name Polygraph Polygraphovich Sharikov. The relationship between Sharikov and Philip becomes increasingly strained. Additionally, Sharikov appears to still have some of the instincts of a dog, such as the desire to chase cats. Sharikov criticizes Philip and Bormenthal for their bourgeois behavior. Sharikov becomes increasingly unruly; he steals things from Philip and disobeys many of Philip's orders.

Philip begins to believe that Sharikov's unruly behavior may potentially be caused by the proletarian nature of the original owner of the testicles and pituitary gland that Philip transplanted into Sharikov. Sharikov finds a job as an animal exterminator and attempts to abuse his power in that position in various ways. Philip and Bormenthal eventually decide to reverse the operation which turns Sharikov back into a dog.

More summaries and resources for teaching or studying Heart of a Dog.

Heart of a Dog from BookRags. (c)2022 BookRags, Inc. All rights reserved.