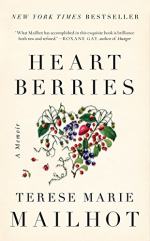 Mailhot, Terese Marie
This Study Guide consists of approximately 45 pages of chapter summaries, quotes, character analysis, themes, and more - everything you need to sharpen your knowledge of Heart Berries.

Heart Berries opens with an introduction by lauded Native writer Sherman Alexie, who was Terese’s professor. He praises her work and contextualizes the forthcoming memoir as a piece of poetry and a work of meditation.

Terese writes that her story has been maltreated and that, over time, she has learned to speak it for herself. She writes about her mother, grandmother, and some of her early childhood experiences before writing that she got married as a teenager in the hope of finding a safe home. However, further tragedy followed. Her mother died, she got divorced, and her husband got full custody of their eldest son. With their infant second son, who her ex-husband showed no interest in, Terese packed up and moved away.

Terese then writes about the early days of her relationship with a man named Casey who left his girlfriend for her. Elements of their relationship are unhappy and Terese feels she lacks autonomy and agency. However, she does not want to be without him. At the same time, she knows that she is not well.

In the next chapter, Terese writes to Casey from a behavioral health service building where she has committed herself for treatment. Their relationship has ended but she still wants him. She reflects on other aspects of their life together and his inability to understand and accept her for who she is. In group therapy, she meditates on the idea of self-esteem and remembers her mother, the poverty of her childhood, and the gravity of being an Indian woman. She tells a story from her childhood in which her mother collaborated with Paul Simon on the development of a new musical. Terese says that her mother’s story was lost in the process and that her character was represented on stage stereotypically. Before being released from treatment, Terese is diagnosed with Post-traumatic Stress Disorder, an eating disorder, and bipolar II.

Terese and Casey rekindle their sexual relationship but he insists that they cannot be in an emotional or romantic relationship of any kind. Terese struggles to deal with his friendships with other women and continues to see a therapist outside of the institution while also applying and getting accepted to an M.F.A. program at the Institute of American Indian Arts. Finally, she gives Casey an ultimatum and they begin their romantic relationship again. Their relationship is highly tumultuous and it is not long before Terese gets pregnant.

Pregnancy is extremely challenging to Terese’s mental health because she must go off her medication for the sake of the baby’s health. She and Casey fight, she becomes violent, is suicidal, and considers getting an abortion. However, they make it through and their child is born.

Terese then segues into a discussion of her father who left when she was young. He was abusive, alcoholic, and an alleged sex offender. Terese writes about reconnecting briefly with her father as an adult, before he died, and attempts to see him as a man rather than as a monster. She then writes about feeling “like a squaw” and this aspect of her relationship to her cultural identity (92). In alternating paragraphs, she writes about her marriage to her first husband and the continuing evolution of her relationship with Casey which results in their marriage.

In the next chapter, Terese considers leaving her new husband and writes about the reasons and motivations for why so many young native women, including herself, leave home. Suddenly, while in a coffee shop one day, Terese is faced with a repressed memory in which her father sexually abused her when she was five or six. She now has to figure out how to deal with and process this new trauma.

Time passes and Terese gets her M.F.A degree. Amid this success, she reflects more on the themes of shame, cultural identity, and inherited trauma. She mediates on the nature of her sorrow and pain and feels that she has finally harnessed it to a certain degree. It appears as though both Terese’s mental health and her relationship with Casey have improved overall since their marriage and her graduation.

In the short final chapter, Terese addresses her dead mother in an attempt to communicate more effectively with her through symbolic language. She asks her mother several questions about life and death before choosing to leave her mother’s body in the earth.

The afterward is a question-and-answer interview between Terese Marie Mailhot and Joan Naviyuk Kane. Through Kane’s questions and Mailhot’s answers, readers learn more about the cultural and literary context in which Mailhot is writing as well as some of her motivations for writing the book.

More summaries and resources for teaching or studying Heart Berries.