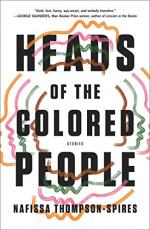 Plot Summary
+Chapters Summary and Analysis
Heads of the Colored People: Four Fancy Sketches, Two Chalk Outlines, and No Apology
The Necessary Changes Have Been Made
Belles Lettres
The Body's Defenses Against Itself
Fatima, the Biloquist: A Transformation Story
The Subject of Consumption
Suicide, Watch
Whisper to a Scream
Not Today, Marjorie
This Todd
A Conversation about Bread
Wash Clean the Bones - Author’s Note
Free Quiz
Characters
Symbols and Symbolism
Settings
Themes and Motifs
Styles
Quotes
Order our Heads of Colored People Study Guide

Nafissa Thompson-Spires
This Study Guide consists of approximately 90 pages of chapter summaries, quotes, character analysis, themes, and more - everything you need to sharpen your knowledge of Heads of Colored People.

This detailed literature summary also contains Quotes and a Free Quiz on Heads of Colored People by Nafissa Thompson-Spires.

The following version of this book was used to create this study guide: Thompson-Spires, Nafissa. Heads of the Colored People. Simon and Schuster, 2018.

As the author comments in her post-collection note, the form and content of the stories are based on, and inspired by, short writings by black authors in the 1900’s, writings that considered the various possibilities for the future of black people in America.

There are 12 stories in the collection, some of which have characters in common. Most of the stories, however, are entirely self-contained. The first gives the collection its title, and relates to the previously referenced source of the author’s inspiration for the collection: “Heads of the Colored People: Four Fancy Sketches, Two Chalk Outlines, and No Apology.” The story considers the young life and violent death of a pair of black men. One enjoys dressing in costumes that resemble those of his favorite anime characters; the other is an artist. The two get into a confrontation, and are shot by police. The second story in the collection focuses on Randolph, a young black academic who gets into conflict with the young, female, Latin academic with whom he shares his office.

The third, fourth, and fifth stories in the collection have a single character in common: Fatima, a young black woman who struggles with body image issues. In the first of these three stories, “Belles Lettres”, Fatima does not actually appear, but is the focus of an increasingly angry conversation between her mother and the mother of one of Fatima’s classmates, the only other black student in their upper-middle class school. The conversation takes place entirely in letters. The third in this trio of stories, “Fatima, the Biloquist” considers another of Fatima’s school-age experiences: the development of her friendship with Violet, who is both black and albino. The middle story in this mini-collection is “The Body’s Defenses Against Itself”, in which the adult Fatima considers how different aspects of her past have affected her present.

In “The Subject of Consumption”, the narrative focuses on the experiences of a white woman named Lisbeth who seems to be willing to do almost anything for fame, and/or for money. As she begins filming the pilot for a reality show that will focus on her family’s unique lifestyle, her black husband realizes that he has had enough, and prepares to leave. The book’s thematic interest in getting attention through the use of technology and social media continues in the next two stories. In “Suicide Watch”, a young woman named Jilly contemplates the different ways that killing herself might gain even more attention for her already popular blogs, while the central character in “Whisper to a Scream” starts to realize that her own internet fame is perhaps not what she wants to be the focus of her life.

The central character in “Not Today, Marjorie” is also a troubled black woman. Marjorie struggles to control her anger, which springs from a deeply troubled childhood but which she does not seem able to manage. Yet another troubled young woman is the narrator of “This Todd”, the story of a black female artist who develops a strange fetish, or obsession, with men whose legs are neither non-functional or not even there.

In “A Conversation about Bread”, two black male graduate students from very different backgrounds discuss ways in which their particular backgrounds, and the lives of black people in general, should be written about and examined.

The collection concludes with “Wash Clean the Bones”, the story of a black single mother traumatized by the violent deaths of young black people, particularly young black men, and who comes close to ending the life of her young son out of fear that he will experience the same sort of death.

After this final story, there is an “Author’s Note” in which the author explains the origins and intentions of the stories, and of the collection as a whole.

More summaries and resources for teaching or studying Heads of Colored People.