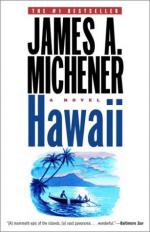 Because of its length and numerous characters, Hawaii has not adapted well to film. Two adaptations of the book have been produced by United Artists: Hawaii in 1966 and The Hawaiians in 1970. The better of the two versions, Hawaii, which deals with the material in the section "From the Farm of Bitterness," stars Julie Andrews, Max von Sydow, and Richard Harris. The Hawaiians, which depicts events in "From the Starving Village," stars Charleton Heston and Geraldine Chaplin.