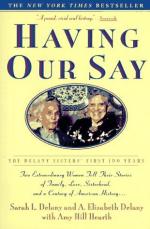 Having Our Say: The Delany Sisters' First 100 Years Summary & Study Guide includes comprehensive information and analysis to help you understand the book. This study guide contains the following sections:

This detailed literature summary also contains Topics for Discussion and a Free Quiz on Having Our Say: The Delany Sisters' First 100 Years by Sarah Louise Delany.

"Having Our Say: The Delany Sisters First 100 Years" written by Sarah and A. Elizabeth Delany with Amy Hill Hearth is a work of non-fiction and therefore has a unique tone for a memoir. The Delanys, particularly Bessie, are well known for being outspoken, straightforward and unapologetic.

Although the book is a joint memoir, the sisters are able to present many facts objectively. The author adds in some historical time frame markers to assist the narrative, which is helpful to the reader. The sisters also relay their view of things as they were (e.g., Harlem during the Depression) and compare those things to the accounts written in history books.

Henry Delany and Nanny Logan Delany did something very few people did in the early 1900s. Both went to college at St. Augustine's School and received degrees. Henry became a preacher and Nanny more or less ran the school. Of the ten Delany children, each went to college and followed the path set by Henry and Nanny, remembering to perform service whenever and wherever possible. Because St. Aug's was a predominantly black school, there wasn't much racism to be encountered. The children began to experience racism and the need for civil rights after they left home and went out into the working world. While there were many movements going on all around them, the Delanys may have been one of the most powerful advocates for civil rights simply through their way of life, both personal and professional.

At the time the book was written in 1991, Sadie was 103 years old, Bessie was 101 years old. Despite their advanced ages, Sadie still took on the role of big sister, protecting Bessie from a world she had conquered long ago. In a time when many black families were relegated to less than acceptable employment and living conditions, the Delany family rose above, eventually becoming one of the most prominent families in black America and the country as a whole.

Service was a huge part of the Delanys' lives. Henry and Nanny stressed it and perhaps more importantly, practiced what they preached at every opportunity. This was ingrained in both long before they became an evangelical family. Those ideals and practices were passed down to all of the ten children. When each Delany child went to college, he was informed that they could expect no charity and must make their own way. Along the way, throughout the rest of their lives, they would be expected to help their fellow man, regardless of color. In that way, all of the children followed the path set by Henry and Nanny, remembering to perform service whenever and wherever possible. Many went into service professions such as medicine and teaching.

The Delanys are a testament to their upbringing and worked hard to do as they were taught in regards to being good, productive people. The family also had a great sense of humor if Sadie and Bessie fairly represent the rest. The sisters are quite funny, blunt, bold, and wise.

At the time the book was written, only three of the ten children had survived. The sisters saw the book as their opportunity to tell about their family's history, not as a black family, but just as a family who strived to do right by each other and the community.

Having Our Say: The Delany Sisters' First 100 Years from BookRags. (c)2022 BookRags, Inc. All rights reserved.