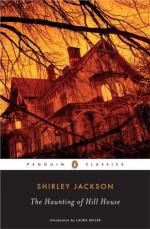 Shirley Jackson
This Study Guide consists of approximately 80 pages of chapter summaries, quotes, character analysis, themes, and more - everything you need to sharpen your knowledge of The Haunting of Hill House.

The Haunting of Hill House Summary & Study Guide includes comprehensive information and analysis to help you understand the book. This study guide contains the following sections:

This detailed literature summary also contains Literary Precedents and a Free Quiz on The Haunting of Hill House by Shirley Jackson.

The Haunting of Hill House takes place over a single week in rural 1950s America. The story begins with a brief introduction to the cast of characters. Dr. John Montague is the psychic researcher who instigates the adventure in Hill House. An anthropologist and doctor of philosophy, Dr. Montague's true passion lies in the study of supernatural phenomena. All of his life he has searched for a truly haunted house. His search leads him to Hill House. After interviewing several former tenants as well as researching the personal effects and papers left behind by the family that built Hill House some eighty years ago, Dr. Montague is elated to realize that he has found the real thing. Hill House is the quintessential haunted house and a perfect location for him to study. Dr. Montague hopes to gather incontrovertible evidence of the haunting of Hill House. Afterwards, he plans to publish his findings with the goal of legitimizing his field of study in the academic arena.

To that end, Dr. Montague seeks out assistants to join him for a summer stay in Hill House. He combs through the records of psychic societies and paranormal laboratories to obtain a short list of twelve promising candidates. To each of these, he writes a letter of invitation. Dr. Montague is a circumspect man and does not state directly in his letters that Hill House is haunted. He refers to troubling rumors about the house, hoping to catch the imagination of just the right sort of assistant. From this exhaustive search, Dr. Montague nets two assistants: Eleanor Vance and Theodora. Eleanor is invited because of her past experience with poltergeist phenomena. Dr. Montague has found a reliable account of a rain of stones, which pelted Eleanor's family home when she was just twelve-years-old.

Theodora, a modern woman who eschews the use of her last name, is valuable to Dr. Montague because she once, on a lark, took some laboratory tests to gauge her psychic ability. She scored amongst the top candidates ever seen by the lab. The final member of the party is Luke Sanderson, a rakish young man whose family owns Hill House. He is sent along to ensure that no one steals the family silver; however, his rich aunt, who owns Hill House, is actually just trying to give him a useful occupation for a few weeks, hoping to help him stay out of trouble. Hill House is hardly the best place for staying out of trouble. From the moment they arrive, they can each sense the malevolence of the house.

Eleanor and Theodora both choose to accept Dr. Montague's invitation for personal rather than professional reasons. Theodora has a huge fight with her female roommate and thinks a summer in the country at Hill House might be the best way to cool off their overheated tempers. Eleanor decides to take Dr. Montague up on his offer in hopes of having an adventure. She has spent the past eleven years caring for her sick mother, who has recently died. Eleanor has sacrificed much of her youth and personal happiness for her mother and now lives unhappily with her sister's family. She desperately longs for a home and a life of her own. When her sister and her husband refuse to let Eleanor drive the car to Hill House, Eleanor sneaks out early one morning and takes the car without permission. Eleanor spends the journey to Hill House dreaming of living in the various houses she passes along the way. She hopes that, finally, something interesting will happen to her at Hill House. An old song echoes in her mind as she approaches Hill House; the song's refrain is journeys end in lovers meeting.

Eleanor is the first to arrive and she is greeted by Mr. and Mrs. Dudley, the caretakers of Hill House. Villagers from nearby Hillsdale, the Dudleys don't care much for outsiders staying in Hill House. Mr. Dudley warns Eleanor away and Mrs. Dudley advises her that no one will hear if Eleanor screams for help in the night. Given this chilly reception and the palpable evil she can sense in the house, Eleanor is terrified to be alone in the huge, old manor. Thankfully, Theo arrives in short order and her sunny presence mitigates the gloom of Hill House. She and Eleanor set off to explore the grounds before it grows dark. They become fast friends as they walk along a picturesque path, which takes them to a babbling brook. Eleanor quickly realizes that Theo is highly perceptive. Theodora picks up on Eleanor's social awkwardness and fear and treats her with gentle kindness. Suddenly, Eleanor becomes alarmed by something in the shadows. Theo feels it, too and the two women race back to the relative safety of Hill House. When they arrive back at the house, they see Luke for the first time. Eleanor thinks to herself, journeys end in lovers meeting.

Dr. Montague welcomes them all inside and that night the foursome convenes for the first time in the parlor, which is to become their headquarters. The parlor, with its fireplace, is the coziest room in Hill House, yet it falls short of actually being cozy. The group does its best to liven up the haunted house with their high spirits. Everyone is looking forward to their adventure and they spend their time together convivially. In the spirit of adventure, none of them discusses their ordinary, mundane lives. Eleanor, Theo, Luke and Dr. Montague all introduce themselves playfully, making up entertaining stories about their supposed pasts. The first night, Dr. Montague reveals why he selected Theo and Eleanor. Eleanor is visibly upset to be reminded of the rain of stones, an incident she had put out of her mind completely. She reacts defensively and Theodora's attempts to soothe Eleanor betray Theo's belief that Eleanor herself was responsible for the falling stones. Nevertheless, the first night ends well, although Eleanor chides herself for being so openly grateful at having been accepted by their social circle.

Time loses all meaning at Hill House as the participants in Dr. Montague's study settle into a routine. They spend their days exploring Hill House and napping, because beginning on the second night they are kept awake by ghostly disturbances. Nonetheless, the little group is elated by the evidence they find of a bona fide haunting. Montague's prize piece of evidence is the undeniable cold spot, which exists at the entrance to the decrepit nursery. At night the group feels frightened, but during the day the spirit of adventure lifts their spirits. Their time at Hill House, at least during the day, feels like a leisurely vacation at a summer home, complemented by the wonderful cooking of old Mrs. Dudley.

Things become more complicated, however, when a lovers' triangle develops between Theo, Eleanor and Luke. Both Theo and Eleanor pursue Luke, or rather, in deference to the morality of the era; both women encourage and allow Luke to pursue them. Yet behind the scenes, sparks fly between Theo and Eleanor. Theo's vaguely defined relationship with her female roommate hints at her sexual preference. Eleanor finds herself responding more to Theo's seductive ways than to Luke's flirtation. However, unlike Theo and Luke, who are both just looking for a summer fling, Eleanor is looking for her happily ever after. She chooses Theo as her life's companion and announces to the shocked Theo that she intends to follow her home and move in with her. To dissuade Eleanor, Theo's interest in Luke takes a sharp upswing. Eleanor's jealousy simmers below the surface and gradually builds to a boiling point.

When a message about Eleanor appears on the walls, followed by a supernatural attack on Theo's room and belongings, the party begins to fear for their physical safety. Although the learned Dr. Montague insists that the ghosts of Hill House cannot harm them, he pointedly comments that poltergeist phenomena can cause damage in the physical world. Everyone begins to suspect Eleanor of causing the frightening phenomena, especially Theo, who outright accuses her of seeking revenge and attention.

The evil that lurks in Hill House thrives on the growing enmity between the two women. In fact, Hill House seems to be waging psychological warfare on Eleanor and Theo, driving a wedge between them. The behavior, thoughts and feelings of these two women eerily echo the relationship between the Crain sisters, two little girls who grew up in Hill House decades ago. The Crain sisters also had a falling out over a man and it seems at times that the resentment Eleanor feels is really the resentment of the eldest Crain sister. The older sister, like Eleanor, became an old maid after losing her beau to the younger sister. The vindictive and painful emotions of this family battle still reside within Hill House and feed Eleanor's own sense of loss and thirst for revenge. The reader cannot be sure whether it is Eleanor or Hill House that is truly responsible for the increasingly threatening manifestations. In Eleanor, Hill House has found a perfect vehicle for reliving the tragic struggles of the past.

When Dr. Montague notices how deeply ensnared Eleanor has become by the ghosts of the house, he insists that she leave for her own safety. Hill House, however, having claimed Eleanor, has no intention of letting her go. As Eleanor drives away from the house, she feels compelled to speed up and turn her car towards an ancient tree at the bend in the driveway. Feeling triumphant, Eleanor thinks she's discovered a way to stay at Hill House despite having been so rudely kicked out. Only in the final moment before her car smashes against the tree does Eleanor's lucidity return. She wonders why she is doing such a disastrous thing, but it is already too late. Hill House has claimed yet another victim to add to the long list of mysterious deaths and supposed suicides which have taken place on the grounds.

More summaries and resources for teaching or studying The Haunting of Hill House.

The Haunting of Hill House from BookRags. (c)2022 BookRags, Inc. All rights reserved.