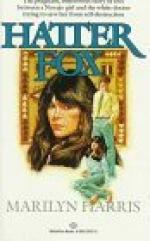 Hatter Fox, published in New York in 1973, was Marilyn Harris's fourth novel. Tapping into an emerging public interest in Native American history and culture, Harris created a story about Hatter Fox, a rebellious, angry seventeen-year-old Navajo girl who is despised by white society in New Mexico. Locked up in a reformatory and on a path of self-destruction, Hatter meets Teague Summer, an idealistic young white doctor from the Bureau of Indian Affairs who is determined to save her from herself. Eventually, after many false starts, Hatter begins to make progress. Summer takes on more and more responsibility for her welfare, and an unlikely friendship takes root before the novel reaches its tragic conclusion.

The novel raises many important social issues that are as relevant today as they were in 1973. For example, how should society deal with young offenders and those who simply do not fit into the way society operates? How should society treat minorities, in this case Native Americans? Should Native Americans assimilate into the dominant culture or retain their own distinct cultural identity? As these issues unfold in the novel, it becomes clear that Hatter Fox is about a deep racism in society that creates individual victims and victimizers. Although there are some good, well-meaning characters in the novel, and the relationship between Hatter and Summer shows that goodness can triumph, the novel clearly shows the negative consequences for both groups when one culture oppresses and tries to change another.