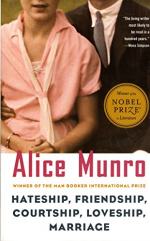 Related Topics
Boys and Girls
Friend of My Youth: Stories
Lives of Girls and Women
Meneseteung
The Albanian Virgin
Walker Brothers Cowboy
The Beggar Maid: Stories of Flo and Rose
Moons of Jupiter (short story)
Dear Life (short story)
Carried Away (Short Story)
The Bear Came Over the Mountain
The Progress of Love (short story)
Runaway
The Love of a Good Woman

The story opens at a train station in a small Canadian town. Johanna Parry buys a passenger ticket from the station agent and inquires about having furniture shipped. She then goes to a local dress shop and buys a born wool dress. The woman who owns and operates the store converses with Johanna, and Johanna informs her that she will likely soon be married while wearing the dress. Johanna carries the cress in a box out of the store and walks towards the post office. She passes Mr. McCauley, for whom she works as a housekeeper, but he does not notice her. At the post office, she sends a letter to Ken Boudreau, her supposed husband-to-be. At Mr. McCauley’s home, she leaves a note for Mr. McCauley informing him of her departure.

After McCauley sees the note, he believes that Johanna has been enlisted by Ken to steal the furniture. Ken is the husband of McCauley’s now deceased wife Marcelle. The furniture belonged to Marcelle and arguably belongs to Ken now. However, Ken owes McCauley a significant sum of money due to all the money he has borrowed from McCauley. McCauley awakes the next day in his empty house, as his granddaughter Sabitha (Ken’s daughter) has moved to Toronto to live with her aunt and attend a private school. Desperate for someone to talk to, he goes to the local shoe repair shop and converses with the owner, Herman Schultz. Herman is the father of Edith, who is Sabitha’s friend.

The narrative then shifts to past events. Johanna had written a letter to Ken to thank him about kind things he had written about her in a letter to Sabitha. Sabitha said she would include Johanna’s letter in the same envelope as Sabitha’s next letter to Ken. However, Ken sent a reply only to Sabitha’s letter, apparently ignoring Johanna’s. Sabitha and Edith decided to write a fake response letter from Ken, thus beginning a running correspondence between Johanna and the girls writing as Ken. In one letter, the girls included declarations of love, and thus Johanna secretly and suddenly decided to relocate to Gdynia, where Ken is residing.

When Johanna arrives in Gdynia, she finds that the town is rather desolate. Ken is living in a derelict hotel that he was given by a friend who owed him money. Johanna finds Ken bedridden due to bronchitis. She nurses him back to health and outlines plans for their future together. Ken admires her efficiency and her organizational skills. Mr. McCauley dies two years later, by which time Johanna and Ken have married and have had a child together.