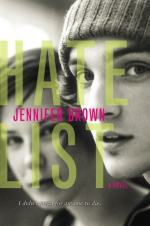 Jennifer Brown
This Study Guide consists of approximately 23 pages of chapter summaries, quotes, character analysis, themes, and more - everything you need to sharpen your knowledge of Hate List.

Hate List is the debut novel by award-winning writer Jennifer Brown. In this novel, Valerie Leftman must return to school five months after her boyfriend, Nick, took a gun and shot their classmates, many of whom Valerie placed on a list she dubbed the hate list. Many of the kids and most of the adults think Valerie knew of Nick's plot to kill the kids on the list despite the fact that Valerie saved the life of one girl and was shot herself. Even the police thought Valerie responsible until an unnamed girl went to the police and insisted that Valerie never shot anyone. In Hate List, Valerie and everyone around her must pick up the pieces after tragedy, creating a story that is both universal and so unique that it will leave the reader changed on a fundamental level.

Valerie Leftman has elected to return to her high school five months after her boyfriend, Nick Levil, took a gun and began shooting inside the school cafeteria, known as the Commons. Valerie stopped Nick and was shot herself, but the media played up the fact that Valerie was co-author of a hate list on which most of the names of the victims appeared. Valerie was investigated by police and cleared, but everyone from Valerie's parents to her classmates continue to believe her guilty to some degree.

On the first day of school, Ginny Baker, a girl Nick shot in the face, runs crying out of Valerie's homeroom. At lunch, Valerie finds herself shut out by her old friends, including the girl who has been her best friend since kindergarten. Surprisingly, however, Jessica Campbell, the one girl who tormented Valerie the most with the nickname Sister Death, reaches out to Valerie and offers to let her sit at her table in the Commons.

Valerie begins to draw as a way to deal with all that is going on around her. At the same time, Valerie looks back on the past, recalling her relationship with Nick and how the bullying of the other kids led to a common bond between Valerie and Nick. When Nick first moved to Garvin their freshman year of high school, Valerie began a flirtation with him. Then, one day when she became frustrated with some of kids at school and the fighting between her parents at home, Valerie began a list of everyone she hated. Nick found this list fascinating and began adding to it with Valerie, making it something they could share in common. Valerie never noticed that the list became something more to Nick, something dangerous.

Valerie is invited to join the Student Council and help work on a memorial for the victims of the school shooting. Valerie tries to help, but finds herself having to turn her back on Nick, the one thing she never thought she could do. At the same time, Valerie discovers that her father is having an affair and that her family is falling apart. Valerie's mother does not trust her, her father is tired of dealing with her, and her brother thinks she's too selfish to see what is going on around her.

At a party, Valerie is threatened by an older kid with a gun. This act pushes Valerie over an edge until she learns that Ginny Baker has attempted suicide. Valerie visits Ginny and suddenly realizes that she is not the only one dealing with Nick's actions. Valerie realizes that people need to know the truth about Nick, but also about those who were his victims. Valerie visits each of the families of the dead and injured, collecting items to be placed in a time capsule that will be the memorial for the shooting. The memorial is presented at graduation where Valerie is finally able to face her fellow classmates and explain her actions as well as show how much Nick's acts have changed her, just like they have changed everyone else.

More summaries and resources for teaching or studying Hate List.