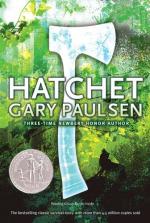 Gary Paulsen
This Study Guide consists of approximately 24 pages of chapter summaries, quotes, character analysis, themes, and more - everything you need to sharpen your knowledge of Hatchet.

This detailed literature summary also contains Quotes and a Free Quiz on Hatchet by Gary Paulsen.

Hatchet was written by Gary Paulsen. In this novel, thirteen year old Brian is flying on a bush plane when the pilot suddenly has a heart attack and dies. Brian manages to keep the plane level until it crashes into a lake. Brian survives the crash, but that is just the beginning. Brian must find a way to survive the wilds of the Canadian forest if he ever hopes to be rescued. Hatchet is an adventure story that will take its character from a common city boy to a survivalist in a manner of days.

Brian Robeson is still reeling from his parents’ sudden divorce when his mother drives him to a private airport where he is to fly on a bush plane to visit his father in the Canadian oil fields. Brian’s mother gives him a hatchet as a parting gift and asks him to try it on his belt. For this reason, the hatchet is still on Brian’s belt when he gets on the plane.

As they fly, the pilot shows Brian how to use the controls. Then, suddenly, the pilot becomes ill. It takes Brian a moment to realize the pilot is having a heart attack. Brian is frightened and unsure of what to do. Brian uses the radio to ask for help, but he loses the signal before he can say much. Brian decides to keep the plane steady until it runs out of fuel. Then, he will try to put it down in a lake. When the moment comes, Brian manages to do just that, crashing the plane into the middle of an L-shaped lake.

When Brian recovers from the crash, he climbs out of the lake and begins taking inventory of his situation. He finds a place where he can build a shelter and some berries to eat. After an attack by a porcupine in the middle of the night, Brian figures out how to make a fire and keep animals out of his shelter. Brian later figures out how to catch fish and even begins to move up to killing larger animals, mostly birds.

One night a tornado hits the section of forest where Brian is surviving. The tornado destroys Brian’s shelter, and it also turns the plane so that the tail section is sticking out of the water. Brian recalls the survival pack that is in the back of the plane and decides to try to get it. Brian builds a raft and takes it to the plane. Brian peels the metal shell off the plane and makes a hole large enough to climb inside. Brian is able to recover the survival pack and drag it back to his shelter.

Inside the survival bag, Brian finds a great many things such as matches, cooking equipment, and multiple packs of freeze dried food. All of these items will be useful to him. Brian also finds a radio, but he does not understand how it works. So, he sets it aside. While Brian is making his first real meal in months, he hears a motor overhead. Brian is surprised to discover that the radio is an emergency transmitter, and he left it turned on. A trader flying overhead heard the signal and has landed to rescue Brian.

More summaries and resources for teaching or studying Hatchet.