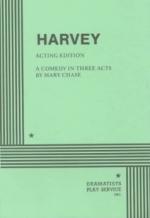 Mary Ellen Chase
This Study Guide consists of approximately 64 pages of chapter summaries, quotes, character analysis, themes, and more - everything you need to sharpen your knowledge of Harvey.

Mary Coyle Chase's Harvey has been an American favorite since it was first brought to the Broadway stage in 1944. Before it opened, there were not very high expectations: the author had only written one play previously, which had been a quick failure. Harold Lloyd, Edward Everett Horton, Robert Benchley, and Jack Haley all turned down the lead role before Frank Fay accepted it. Fay, a retired vaudeville actor, astounded the critics with his performance. The play won the Pulitzer Prize for drama in 1944, and its initial run lasted for four years 1,775 performances. It has continually been revived around the globe since then. It was also adapted to film in 1950, starring Hollywood legend James Stewart, and has become one of Stewart's best-loved films.

The story is about Elwood P. Dowd, a good-natured, mild-mannered eccentric who is known in all of the cafeterias and saloons in his small town. Elwood is polite and cheerful and always friendly toward any strangers he might encounter, and he has just one problematic character trait: his best friend is an invisible six-foot-tall rabbit, Harvey. Wherever he goes, he brings an extra hat and coat for Harvey, and he buys theater tickets and railroad tickets in twos so that they can go everywhere together. His sister and her daughter try to have Elwood committed to the local sanitarium, where the behavior of the prominent psychologist and his staff raise the age-old question of who is more dangerous to society: the easy-going dreamer with a vivid imagination or the people who want him to conform to the accepted version of reality.

More summaries and resources for teaching or studying Harvey.

Harvey from Gale. ©2005-2006 Thomson Gale, a part of the Thomson Corporation. All rights reserved.