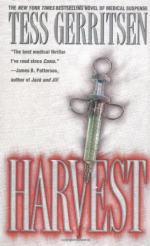 Tess Gerritsen
This Study Guide consists of approximately 32 pages of chapter summaries, quotes, character analysis, themes, and more - everything you need to sharpen your knowledge of Harvest.

This detailed literature summary also contains Topics for Discussion and a Free Quiz on Harvest by Tess Gerritsen.

Abbey DiMatteo is a resident at Bayside Hospital. She is working through rotations when a woman named Karen Terrio is admitted. Karen was in an accident and there's no hope of recovery. However, she has healthy organs and it's left to Abbey to help Karen's husband come to terms with donating Karen's organs. Abbey's friend and colleague, Dr. Vivian Chao, is caring for a teenage boy named Josh O'Day, and Vivian hopes that Karen's heart will be Josh's chance at recovery. Abbey learns that Josh, who had been at the top of the list for a transplant, is no longer holding that spot. Instead, Karen's heart is being designated for a woman named Nina Voss. Abbey, working with Vivian to save Josh's life, urges Karen's husband to designate Josh as the recipient of Karen's heart and he does so. The transplant is a success but Nina's husband, millionaire Victor Voss, is very angry and demands that Abbey be fired. The hospital doesn't fire her, but Abbey knows that her job is in jeopardy. However, the following night Abbey learns that another donor has been found for Nina Voss and she receives a heart.

Abbey questions the fact that two donors had been available with that specific blood type, and over the coming days, realizes that there's something wrong with the donor file on Nina's heart. Abbey, backed by Vivian, initially thinks there's an underground transplant network and that medical personnel are being bribed to channel organs to specified donors. What she eventually discovers is that donors are being "generated." Healthy people are being killed in order to create enough organs to meet the needs of those rich enough to pay the multi-million-dollar price. Victor Voss was among those people.

A ten-year-old boy named Yakov who lives with a man he calls "Uncle Misha" is among the intended victims. Yakov is Russian and is told that he's going to be adopted by a couple in the west. Yakov is skeptical but is powerless to escape the situation. Yakov watches as the three boys who were taken with him are each "chosen" for adoption. In truth, each is killed and a particular organ harvested. Yakov sees one of the boys taken into a room where the surgery is performed and realizes that the boy never comes out.

Meanwhile, Abbey is harassed by Victor Voss, with several lawsuits filed against her. Abbey is about to prove the existence of the conspiracy when she's in a wreck and taken to the emergency room at Bayside. There her blood work is manipulated so that it seems she was drunk at the time of the accident. Knowing that some Bayside doctors are at the heart of the conspiracy, Abbey escapes and is on the run when she's captured by the doctors involved. She's held on the ship briefly with Yakov. Abbey is on the verge of being murdered for her own organs when she's rescued.

More summaries and resources for teaching or studying Harvest.