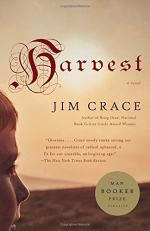 Jim Crace
This Study Guide consists of approximately 56 pages of chapter summaries, quotes, character analysis, themes, and more - everything you need to sharpen your knowledge of Harvest.

This detailed literature summary also contains Quotes and a Free Quiz on Harvest: A Novel by Jim Crace.

The following version of this book was used to create this study guide: Crace, Jim. Harvest. Random House, 2013. Paperback.

Set in an insular agrarian village, Crace’s novel opens during harvest season, an annual time of plenty and celebration in the community. This year’s harvest, however, is slightly different than usual: there is a man the villagers do not recognize watching them work, taking notes and making charts – the villagers soon deem him Mr. Quill. Against the backdrop of the harvest, the novel’s action begins with a pair of fires: a campfire in the woods outside the village’s bounds, and a fire in the dovecote of the village’s Master Kent. The novel’s narrator, Walter Thirsk, suspects that the dovecote fire is the work of three young men in the village, who set the fire by mistake while high on hallucinogenic mushrooms. But one of those young men, Brooker Higgs, attempts to divert blame from himself by suggesting that the newcomers in the woods, who have built the campfire, are also responsible for the fire in Master Kent’s dovecote.

The villagers do not challenge Higgs’ claim, and a group goes into the woods to confront the newcomers, where they discover a young man, an older man, and a woman; they appear to be a family, but their specific relationships are not immediately clear. A violent standoff between the villagers and the newcomers is narrowly avoided, and Master Kent sentences the men to a week in the pillory. When the woman spits toward Master Kent in response to this decision, he orders her to shave her head. She then spits on his horse, Willowjack.

That night, the villagers celebrate their harvest with a feast. At the feast, Master Kent announces that the village’s enterprise will soon transition from crop farming to the industrial production of wool. During the feast, the newcomer woman – whom Master Kent deems Mistress Beldam – appears suddenly and unexpectedly, then disappears almost as quickly as she came. All of the village’s men find her captivating.

Thirsk leaves the feast and goes to the pillory, where the male newcomers are imprisoned. He notices that the older man is standing on tiptoe and looks extremely uncomfortable in the structure. Thirsk considers bringing him a log to stand on but forgets to. At Master Kent’s order, he later goes into the woods in search of Mistress Beldam, but he cannot find her.

The next day is Gleaning Day, when the villagers get to scour the recently harvested fields for fallen grain to keep for their personal use. Mr. Quill chooses a Gleaning Queen, the four-year-old Lizzie Carr. Thirsk, who has injured his hand in helping to put out the fire in Master Kent’s dovecote, shows Mr. Quill the village’s ground instead of gleaning with his neighbors. During their walk, Mr. Quill reveals that a man named Edmund Jordan – the cousin of Master Kent’s deceased wife, Lucy Jordan – is on his way to the village to claim his legal right to its lands, and that the plans for the village’s pivot to wool production are his.

When Mr. Quill and Thirsk return to the village, the older male newcomer has died in the pillory. Master Jordan and his sidemen arrive, and they go into the manor house with Master Kent and Mr. Quill to talk. Thirsk follows them inside and overhears their conversation, in which he learns the details of Master Jordan’s plans for the village – specifically, that he does not plan to find a place in the new economic model for its current residents.

Master Jordan’s sidemen capture Lizzie Carr and two village women – Kitty Gosse and Anne Rogers – and take them to the manor house for questioning, eventually torturing them and accusing them of witchcraft. In response, the villagers decide to approach the manor house and negotiate with Master Jordan for the captives’ return. Meanwhile, Mr. Quill and Thirsk keep watch for Mistress Beldam, whose whereabouts are still unknown. Mr. Quill has learned that Mistress Beldam and the surviving man in the pillory are husband and wife. The men see her come to visit her husband that night, but when she hears the group of villagers returning from the manor house she runs into the woods, and Mr. Quill runs after her.

Thirsk learns that his neighbors, when they approached the manor house, offered up his name as a suspect in Master Jordan’s witch hunt. But Master Kent informs Thirsk that his cousin seems to trust him, and that he is likely safe. But the women and Lizzie Carr, seeking relief from torture, have offered up dozens of names to Master Jordan’s sidemen.

The next day, after Master Jordan’s groom makes a snide comment about Lizzie Carr burning at the stake, a violent mob of villagers attacks him, and a young man slices open his face. The villagers, realizing that Master Jordan will not let the injury go unpunished, flee the community, leaving Thirsk alone.

Master Jordan, delighted that the village has cleared itself out, enlists Thirsk to be the land’s steward while he leaves for a year to procure the supplies for a sheep farm. Master Jordan, his sidemen, and Master Kent leave the village, taking the imprisoned women and Lizzie Carr with them. Thirsk decides he must plow the land one last time, and – against Master Jordan’s orders – releases the young man from the pillory to help him. After they plow the field, Thirsk scatters a row of barley seeds, and a sudden thunderstorm waters them.

The young man disappears that evening, and the next day he and Mistress Beldam pillage the manor house and set fire to the villagers’ former homes. Thirsk watches from the high turret of the manor house, and on the way back down he discovers Mr. Quill, stabbed to death, in the attic. Thirsk sets the manor house on fire, cremating Mr. Quill, then packs up and leaves the village to start a new life.

More summaries and resources for teaching or studying Harvest: A Novel.