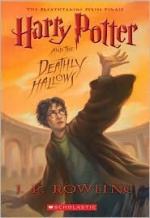 This detailed literature summary also contains Topics for Discussion and a Free Quiz on Harry Potter and the Deathly Hallows by J. K. Rowling.

Harry Potter and the Deathly Hallows is the seventh and last in the Harry Potter series. This novel follows Harry Potter and his two closest friends, Ron Weasley and Hermione Granger on their quest to destroy the evil Lord Voldemort.

During the first six books, Harry and his friends have gathered knowledge of magic in their years at Hogwarts, the school for wizards. Now they are in their last year at Hogwarts and are not planning on returning. They are opting, instead, to go in search of the Horcruxes of Lord Voldemort. Horcruxes each contain some power of Voldemort, and the three believe that by finding and destroying these, they will be able to destroy Voldemort.

During this novel, Voldemort takes over the Ministry of Magic and begins his returned reign over the magical world. Evil prisoners of Azkaban, the prison for wizards, are released and replaced by those who resist Voldemort, and those who aren't pure bloods (not both parents are known wizards). Death Eaters, or followers of Voldemort are given power to do as they wish. Muggles, or those who are not wizards, are tortured and killed for the fun of it, and those who interfere are punished. People are confounded (have their minds magically controlled) into performing the will of the Death Eaters. Dementors, evil creatures typically used only to guard prisoners, are allowed into everyday areas of civilization. Life in general is depressing and scary.

Harry Potter and his friends, Hermione and Ron, end up in hiding during most of their quest. Because Voldemort is aware that Harry has a certain power when facing him that no other has, Voldemort is threatened by Harry and has made Harry the number one undesirable, or the most wanted person. Voldemort also learns of the Elder Wand, which is the most powerful wand in existence. He goes in search of this powerful wand in order to ensure victory against Harry in their next encounter.

Harry faces many obstacles in his quest. He loses his broom during his first encounter with Death Eaters and Voldemort. During his second encounter with Voldemort, Hermione breaks Harry's wand. He and his friends face the challenge of finding all the Horcurxes and finding a way of destroying those Horcurxes.

Harry has a tie with Voldemort that is unique only to him. He is the "boy who lived," the only one to ever survive the killing curse, sent from Voldemort, which happened when he was an infant. It is later revealed to Harry by Dumbledore that when Voldemort cast the spell to kill Harry, it backfired, and they have a part of each other within themselves. This is why Harry can hear Voldemort's thoughts. Dumbledore reveals that the only way for Voldemort to die is for all the horcuxes to be destroyed, and then for Harry to be destroyed by Voldemort. Although Harry follows this advice, he does not die. He and his friends destroy all the horcuxes, and then he and Voldemort duel.

Voldemort has obtained the Elder Wand, but does not fully understand the art of wands. A wand chooses its master, and when its master is overpowered, it changes its alliance. Although Voldemort possesses the Elder Wand, due to a previous chain of events, Harry is master of the Elder Wand. In the end, when Voldemort casts the spell to kill Harry, the spell rebounds and kills Voldemort instead.