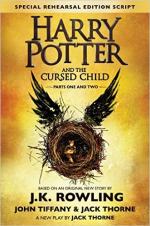 This detailed literature summary also contains Quotes and a Free Quiz on Harry Potter and the Cursed Child by J.K. Rowling, Jack Thorne, and John Tiffany.

Albus Potter has grown up in the shadow of his father's fame and he struggles to find his way as a youngster and then as a teenager. His relationship with his father is difficult as neither is really able to communicate and both feel the pressure of failing in their family duties. Naturally, Albus rebels and finds himself in trouble, but the trouble is multiplied by the magical nature of his world.

This novel takes place more than 20 years after Harry Potter's adventures at Hogwarts. He and his friends have grown up and entered adult lives, careers, and families in the magical world. Harry and Ginny Weasley are married and have three children, Albus, James, and Lily. Harry has a job in the the Ministry of Magic's office. Hermione Granger and Ron Weasley are married and have two children, one son and a daughter named Rose.

There are the typical arguments and teasing between siblings as Albus and James head off for their magical training at Hogwarts School of Witchcraft and Wizardry. The first years pass quickly. Albus is named to the Slytherin House and feels that puts him in a poor light considering his father's past. He has a chance meeting with a boy named Scorpius Malfoy, the son of Draco Malfoy, and they immediately recognize their mutual need for friendship. Scorpius deals with the rumors that he might be the son of Voldemort, which makes him a pariah among the other students.

While home on break, Albus overhears Harry talking to an old man named Amos Diggory. Amos wants Harry to use a Time-Turner to go back in time and save Cedric Diggory, Amos's only son. Harry refuses. Albus convinces Scorpius to steal the Time-Turner and to go back in time. They enlist the help of Delphi, the woman they believe to be Amos's niece. She claims to offer to help because Cedric is her cousin and she wants to save his life. Their first trip back in time changes things slightly, and they go back a second time with a better plan that they hope will achieve the desired results. When Scorpius returns to the present for the second time he discovers that Albus does not exist because Harry died and that the world is filled with Darkness ruled by Voldemort. He finds that Professor Snape is alive and enlists the help of Snape, Hermione, and Ron to set things right.

When Albus and Scorpius return again, they are in trouble with their parents and the school administrators. Scorpius reveals that he has the Time-Turner and the boys decide they need to destroy it. Before they can accomplish that, Delphi steals it and announces that she plans to go back in time to ensure that Voldemort succeeds in ruling the magical world. They soon learn that she is Voldemort's daughter.

Delphi goes back in time to 1981, when Voldemort killed Harry's parents. That event gave Harry power and weakened Voldemort. Scorpius and Albus travel with her but are unable to stop her from destroying the Time-Turner, leaving them all stranded in 1981. Albus manages to send a message to Harry. Draco Malfoy has a second Time-Turner, though it is illegal to own one. Harry, Ginny, Hermione, Ron, and Draco travel to 1981, where they defeat Delphi. They are then forced to stand by while Voldemort murders Harry's parents.

Back in the present, Harry and Albus begin to work on their relationship. Both realize it will be a difficult road but pledge to try.