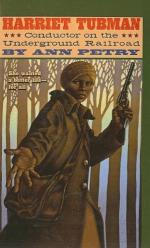 Harriet Tubman: Conductor on the Underground Railroad is an interesting and well-written book that tells the story of an extraordinarily courageous and committed woman. Tubman continues to inspire those seeking dignity for all people in America. Petry's dramatization of Tubman's perseverance and sense of purpose in leading slaves to freedom shows how a motivated individual can bring about change.

Petry intends for Harriet Tubman to fill a void in an important part of United States history and asserts that "the majority of textbooks used in high schools do not give an adequate or accurate picture of the history of slavery in the United States." A completely adequate and accurate account of slavery would no doubt require many volumes, yet this biographical novel represents significant movement toward that ideal. It juxtaposes well-known historical information with details about Tubman's "underground" activities. This technique adds depth and relevance to the story of Tubman's achievements.