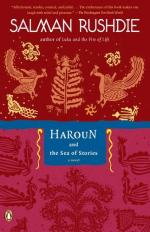 Haroun and the Sea of Stories Summary & Study Guide

Salman Rushdie
This Study Guide consists of approximately 38 pages of chapter summaries, quotes, character analysis, themes, and more - everything you need to sharpen your knowledge of Haroun and the Sea of Stories.

Haroun and the Sea of Stories Summary & Study Guide Description

Haroun and the Sea of Stories Summary & Study Guide includes comprehensive information and analysis to help you understand the book. This study guide contains the following sections:

This detailed literature summary also contains Topics for Discussion and a Free Quiz on Haroun and the Sea of Stories by Salman Rushdie.

Salman Rushdie's Haroun and the Sea Stories is a shows a depressed professional storyteller and his adolescent son traveling to Earth's second, invisible moon, where all stories are born. They foil the poisoning of the Ocean of the Streams of Story and rescue a kidnapped Princess, get back the father's gift of gab, and see their family reunited.

Young Haroun Khalifa feels guilty about his parents' separation and father Rashid's losing his "gift of gab," dangerous in a professional storyteller. It has left Haroun's attention span 11 minutes long. They go to an engagement at Dull Lake, driven by speed-crazed Mr. Butt, and are housed on an elegant houseboat by politico Snooty Buttoo. During the night, Haroun encounters Iff the Water Genie, who has been sent to disconnect Rashid from the source of all stories. Haroun will not hear of this, declaring his father is not ready to give up. He captures Iff's marvelous Disconnecting Tool and forces him to take him to a forbidden City on Earth's invisible, watery moon Kahani. Butt the Hoopoe, a mechanical bird, is Haroun and Iff's means of conveyance. A cup of "Stream of Story" produces in Haroun a nightmare state and makes him wary of drinking anything. The nightmare shows that the Ocean is being polluted.

Haroun makes new friends Mali, a human-shaped vegetable creature, and Bagha and Goopy, Plentimaw fish, who convince him how bad the pollution is getting, particularly in the "Old Zone," where the neglected Wellspring flows. They arrive in Gup City, which is mobilizing for war to save not only the Ocean, but also ugly Princess Batcheat, who has been kidnapped by the same villain responsible for the pollution. Rashid shows up, having dreamed his way and been arrested as a spy. He has witnessed the kidnapping and agrees to serve as scout. The armada moves out, debating strategy the whole way. The Ocean is worse polluted than feared. In Chup, they meet a fearsome warrior, Mudra, and his independent-minded Shadow, ready to rebel against Khattam-Shud. The question of whom to save first vanishes, because Khattam-Shud and his shadow have gone separate ways.

Haroun and Iff go to spy on the Old Zone but are taken captive to the shadowy Dark Ship whose mission is systematically to poison the Ocean at its source. Khattam-Shud looks like a clerk but can expand dramatically into a great monster at will. As Khattam-Shud explains his actions and boasts, Haroun sees the Chupwalas' vulnerability to light, uses the Bite-a-Lite to blind them momentarily, puts on a diver's suit, and escapes. By wishing beyond his eleven-minute attention span, he saves the Source of Stories from being unobstructed, by causing the Moon to turn, making the shadows melt away. In the opposite hemisphere, the Citadel of Gup melts when the sun comes out and the great idol topples, its head squashing the fleeing Khattam-Shud. Everyone is promoted, peace reigns, restoring the Oceans is given top priority, and Prince and Princess marry. Before heading home, Haroun is granted any wish, but cannot see how it can come true. Time has been reversed, so Rashid has not missed his performance, which consists of "Haroun and the Sea of Stories," as just told. Voters connect Khattam-Shud with Snooty Buttoo and run the latter out of town. Haroun derives no pleasure from seeing his city happy until he sees his repentant mother in the doorway. On his birthday, Haroun sees that time is on the move again.

More summaries and resources for teaching or studying Haroun and the Sea of Stories.

Haroun and the Sea of Stories from BookRags. (c)2022 BookRags, Inc. All rights reserved.