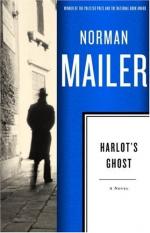 This detailed literature summary also contains Topics for Discussion and a Free Quiz on Harlot's Ghost by Norman Mailer.

Harlot's Ghost is a novel discussing the Central Intelligence Agency or CIA career of Harry Hubbard. Jumping back and forth through time, the novel deals mostly with Harry's young adulthood working in espionage around the world, particularly in Washington D.C., Berlin, Germany, Uruguay, and Miami.

Harlot's Ghost is divided into two versions of Harry's autobiography, the Alpha and the Omega, named after his cousin and later wife, Kittredge's theories about the human mind. The novel starts with the Omega manuscript, which describes an evening when Harry returns home to his wife Kittredge from a trip to see his mistress only to discover that his mentor and Kittredge's first husband, Harlot, has died. It is difficult to tell if the death was an accident or a murder, ostensibly orchestrated by the CIA. After a discussion with one of his colleagues, Harry returns to Kittredge, who announces that she is leaving him for another CIA agent.

The novel then turns to Harry traveling to Russia later on, re-reading his other autobiography, Alpha, with a working title of The Game. This manuscript begins by describing Harry's early life as a shy child under the control of his father, Cal, who is a CIA agent, and his introduction to his godfather Hugh Montague, also known as Harlot, who is in the CIA. He then discusses his undergraduate career at Yale University, his CIA training, and his early days at the agency in the 1950s and early 1960s. Harry's first assignment after training is in the document filing room at CIA headquarters, where he inadvertently makes a mistake that severely upsets the station chief.

In Berlin, where he works under that same station chief, a domineering man called Bill Harvey, who does not realize who Harry is. Harvey is obsessed with building a tunnel to track Soviet information from West to East Berlin. He is also obsessed with finding out who made the mistake in the document room. When he begins to suspect Harry, Harlot has Harry's assignment changed and he goes back to Washington briefly, then to Uruguay, where he works on more anti-Communist missions.

After Uruguay, Harry is transferred to Miami to work on overthrowing Cuba. At this point, he is reporting to Cal and Harlot as well as his station chief, as they are all working to bring down Castro in different ways. At this time, Harry becomes involved with a girl called Modene, who he is required to sleep with for his job, and who is also dating Frank Sinatra, a mobster called Sam Giacana, and John F. Kennedy, Jr. At the same time, Harry is still working on various tactics to overthrow Castro's regime, including involvements in the Bay of Pigs and the Cuban Missile Crisis. Eventually, the Bay of Pigs fails, Kennedy succeeds in diverting the Cuban Missile Crisis, Modene and Harry break up, and Harry's relationship with Kittredge deepens through their correspondence.

By the end of the book, Harry is working with his father, having finally lived up to his expectations, and even goes to fire his old boss, Bill Harvey. He has succeeded in the Agency, to a certain extent. However, the book ends with him in Moscow, searching for Harlot after Harlot's supposed death in the boat, convinced that his former mentor is still out there somewhere. The book ends with the phrase "To Be Continued," although it never was.