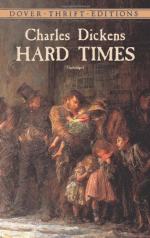 At the opening of Hard Times by Charles Dickens, the reader meets Thomas Gradgrind, a London merchant-turned-politician who is obsessed with the school of Fact. Gradgrind believes that there is no place in one’s life for curiosity, imagination, or “Fancy.” So, he insists that his children be educated on Fact alone, filling them up with information as one would fill a vase with water. Gradgrind believes that all children should be taught this way, and he has taken a particular interest in Sissy Jupe, the fanciful daughter of circus performers. Based on Gradgrind's criteria, Sissy is too emotional to be considered “teachable.” After learning that Sissy’s circus performing father has abandoned her, Gradgrind takes Sissy in and raises her in his home, the aptly named Stone Lodge. There, he hopes to strip Sissy of her imaginative spirit. He also hopes his own daughter, Louisa, will realize the dangers of indulging in one’s emotions over Fact alone.

Meanwhile, Gradgrind’s friend, Josiah Bounderby, a London bank and factory owner, runs his business with the same emotionless, mechanized system of Fact alone. He refuses to view his factory workers as human, referring to them as Hands, or little more than cogs in a machine. When Louisa becomes of age, Bounderby asks for her hand in marriage, even though he is much older and her education has left her too emotionally void to truly love him.

Tom, Gradgrind’s son, also becomes involved in Bounderby’s life when he comes to work at Bounderby’s bank. As he ages, Tom grows angrier and angrier about the education his father forced on him. He has matured into a selfish, conniving, and cruel young man. When his sister refuses to help him with his gambling debts, Tom concocts a plan to rob the bank and blame the crime on one of Bounderby’s Hands, a pure-hearted yet sad man named Stephen Blackpool. Tom chooses to exploit Blackpool after learning that the rest of the Hands have turned against him in his refusal to join their union against the horrific conditions Bounderby forces them to work in.

At the same time that Tom decides to rob the bank, a handsome young stranger named James Harthouse comes to town. Harthouse initially arrives in London to study Gradgrind’s political philosophy, but when he learns that Louisa is stuck in a loveless marriage, chases the thrill of awakening emotion in her cold heart. Harthouse never loves Louisa, although he leads her to believe he does, simply to manipulate her. When Louisa begins to fall in love with Harthouse, she suffers an emotional breakdown and confronts her father about the mistakes he made when raising her. Faced with Louisa’s breakdown and the suspicion that Tom has robbed the bank, Gradgrind is forced to see the error of his ways. He is filled with self-loathing and vows to make a change in his children’s lives, even though he feels incapable of teaching them to love.

The novel ends with each of the characters receiving their just rewards. Sissy takes over Louisa’s education and teaches her, for the first time, what it means to love. Louisa spends the rest of her life with Sissy, even after Sissy marries and has children. Tom is able to escape prosecution for the bank robbery when he runs away with the circus and eventually sails to South America. Bounderby dies miserable and alone, while Gradgrind ambitiously works to clear Blackpool’s name of the accusations Tom made against him.