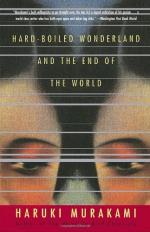 Hard-Boiled Wonderland and the End of the World - Chapter 34, Skulls Summary & Analysis

Haruki Murakami
This Study Guide consists of approximately 60 pages of chapter summaries, quotes, character analysis, themes, and more - everything you need to sharpen your knowledge of Hard-Boiled Wonderland and the End of the World.

The Dreamreader travels to the librarian and meets the Librarian. He informs her that he intends to attempt an escape with his shadow. He briefly discourses on the nature of mind; how belief inevitably leads to disappointment and despair. The Librarian remembers her mother; she had been driven into the woods because she still possessed some mind. The Librarian startles the Dreamreader by stating that she thinks she could possibly believe in something. The Dreamreader notes that he has only twenty-one hours left before his escape attempt; in that time he will attempt to read old dreams and discover in them fragments of the Librarian's mind which could be restored to her.

The mind evaporates on the death of one's shadow and is thereafter absorbed slowly by the living unicorns. When the unicorns die the fragments of mind...

More summaries and resources for teaching or studying Hard-Boiled Wonderland and the End of the World.

Hard-Boiled Wonderland and the End of the World from BookRags. (c)2022 BookRags, Inc. All rights reserved.