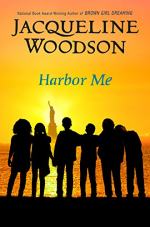 Get Harbor Me from Amazon.com
View the Study Pack
Study Guide
Order our Harbor Me Study Guide

Jacqueline Woodson
This Study Guide consists of approximately 76 pages of chapter summaries, quotes, character analysis, themes, and more - everything you need to sharpen your knowledge of Harbor Me.

Harbor Me Summary & Study Guide includes comprehensive information and analysis to help you understand the book. This study guide contains the following sections:

This detailed literature summary also contains Quotes and a Free Quiz on Harbor Me by Jacqueline Woodson.

Harbor Me by Jacqueline Woodson is a novel written for a middle grade audience but overflowing with valuable lessons for readers of any age. The novel is a frame narrative that features narrator Haley Anderson, a sixth-grade student in a Brooklyn school. She tells her personal story over the course of the novel, but the inner frame features the lives and stories of five of her classmates. Haley's story begins as she sits in her bedroom, reflecting on the events of the past school year. Her uncle is upstairs preparing to move out of the house now that her father has just moved back home. Her life is moving forward, but for now she is remembering the past.

Haley tells the story of her five classmates who are all part of a special class for students with learning differences. One day their teacher, Ms. Laverne, took them to the former art room and explained that for the remainder of the year this was their special space to just talk every Friday afternoon for the last hour of the school day. No adults would be present and they could talk about anything or do anything with the time. At first, the kids thought the whole idea was strange. They were uncomfortable with each other and unsure of how to spend the time. They dub the place the ARTT (A Room to Talk) room.

Then, following a visit to her dad who was in prison for the last eight years, Haley got the idea to record whatever the kids talked about so that they would have their stories and thoughts kept as a memory for anyone to hear. She made the first recording herself and recounted a history lesson from Ms. Laverne. She had taught the kids about the Lenape Indians who had once walked the very land where they now were in New York. Then the Dutch settlers came and chased them from their homes. Ms. Laverne asked the children a question. If they had lived during that time, would they have helped the Lenape or taken the land for themselves? She told them to always remember that even if the worst thing happened, they should always protect someone else and be a harbor to someone who needs it.

The theme of being a harbor for others runs throughout the remainder of the novel as the children share their stories of heartbreak and frustration centering on social issues of immigration, race, and incarceration. Each week the kids share and record their stories. Esteban shares his worry over his father who was taken by immigration officials and placed in a detention center. Amari shares how life sometimes seems to change too quickly. He is angry that because he is black he can no longer play with his toy guns in the park, but his white friend, Ashton, is still able to do so. Ashton has his own struggles with racial issues, as for the first time in his life he is in the minority. As one of the few white kids in the school, he is bullied by a group of older boys and suffers from physical attacks in the school yard. Holly wrestles with being treated as an equal with her friends as she is somewhat elevated out of racial difficulties because her family is financially well-off. Tiago is sad that people make him feel ashamed that he loves to speak Spanish, the beautiful language he speaks at home with his family. As the kids share their stories, they find comfort in being heard. They build bonds of friendship that cross the racial barriers that otherwise exist in the world beyond the ARTT room. For each person, the ARTT room and the friends inside are the harbor that each person needs.

As the school year nears its end, Haley finally musters the courage to tell her own story about her father's incarceration and her mother's death. As the novel comes to a close, Haley comes to understand that forgiveness is one of many ways to provide a harbor for someone as she learns to forgive her father and welcome him back into her life.

More summaries and resources for teaching or studying Harbor Me.

Harbor Me from BookRags. (c)2022 BookRags, Inc. All rights reserved.