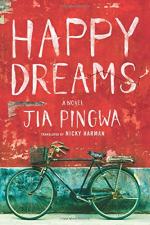 Pingwa, Jia
This Study Guide consists of approximately 58 pages of chapter summaries, quotes, character analysis, themes, and more - everything you need to sharpen your knowledge of Happy Dreams.

The following version of this book was used to create this study guide: Pingwa, Jia. Happy Dreams. Amazon Crossing, 2017.

Best friends Happy and Wufu leave their rural town of Freshwind and enter the big city of Xi'an to work as trash pickers. Happy feels more like a city man than a rural worker, but he thinks of Wufu as a country bumpkin. This makes Happy feel responsible for Wufu and he teaches him the ways of the city. They are employed by Gem Han as trash pickers presiding over several districts on Prosper Street. Happy delights in his work as a trash picker and sees it as an opportunity to reach the status and recognition that he deserves as a man more naturally inclined to the sensibilities of city life. Wufu's aim is to make as much money as possible and he regards money as his ultimate goal. When Happy falls in love with a prostitute, Meng Yichun, he is moved by the sad story of her brother's murder to provide her with more money to fund the investigation behind the killer. Happy and Wufu take on odd jobs in manual labor, but they soon discover unjust bosses exploit their work. Eventually, while enduring deplorable work conditions, Wufu gets sick and dies from a cerebral hemorrhage. Without money to keep Wufu in the hospital, Happy tries to carry his body back to Freshwind, fulfilling Wufu's last wish to be returned home.

Before Happy meets Meng and Wufu dies, Happy and Wufu live in an apartment complex Happy calls the Leftover House, because it seems to have been left unfinished. Their neighbors, Eight, Almond and her husband Goolies are also trash pickers and they work with one another on several odd jobs. Their friendship is bonded by their shared struggles and scatological sense of humor. Eight and Wufu get drunk together and play betting games, which Happy disapproves. Unlike the other migrant workers, Happy desires to live a life that reflects the city's cultural standards. He wants to be perceived as a city man, and finds himself correcting Wufu's manners in restaurants to save face. Happy protects Wufu from people who try to take advantage of him in business exchanges and reluctantly joins Wufu in his expeditions to the Night Market and to a medical plant. Happy's air of authority allows him to defend Wufu and other migrant workers successfully. Happy plays the flute beautifully and rumors spread that he used to belong to a music conservatory until his family came upon hard times. Although Happy is thrilled that he has garnered some admiration and respect, he is saddened by the truth, that he is still only a trash picker.

One day, Happy meets Meng Yichun, a prostitute who works at a beauty salon, and falls in love. He struggles with his feelings but is reminded of the Chain-Bones Bodhisattva, who was also a prostitute revered for her service to others. Happy adores Yichun and upon discovering that she is working only to pay police to capture her ex-fiancé who murdered her brother, Happy is moved to give her money to support her endeavor. Happy thinks that Yichun's john, Mighty, a prominent business man, may be the man who owns his other kidney, and he feels deeply bonded to him. However, he soon discovers that Mighty does not have his other kidney and loses his connection to Mighty. Moreover, when Yichun is arrested during a police raid, Happy is disappointed that Mighty chooses not to associate with her any longer. Happy realizes that Mighty is a selfish man and not the person he idealized city folk to be. Nevertheless, Mighty fulfills his promise to provide Happy with a job working for him, thus making possible his upward mobility in the city. Happy's admiration of the city is complicated once he realizes businessmen look down on migrant workers like him and Yichun.

Happy tries to make more money to help Yichun out of rehabilitation. Happy enters the workforce as a trench digger with Wufu and Lively, a mischievous beggar who amuses Happy. The men do not receive their wages from their employer, Mr Lu, and when Happy confronts him, nothing gets accomplished. They are making less money than they would were they trash picking. One day after a night of drinking, Wufu suffers a cerebral hemorrhage and dies in the hospital. Before he dies, Lively offers him a piece of shark fin to eat, which was actually only a noodle, so he may experience the luxury he dreams of once before he dies. Happy and Lively sneak his body out of the hospital to return it to Freshwind, fulfilling Wufu's final wish to be returned home if he were to die. However, they are caught and Wufu's body must be cremated in Xi'an. Wufu remains a restless ghost in the city.

More summaries and resources for teaching or studying Happy Dreams.