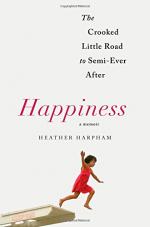 Heather Harpham
This Study Guide consists of approximately 46 pages of chapter summaries, quotes, character analysis, themes, and more - everything you need to sharpen your knowledge of Happiness.

This detailed literature summary also contains Topics for Discussion on Happiness: A Memoir by Heather Harpham.

The following version of this book was used to create this study guide: Harpham, Heather. Happiness: The Crooked Little Road to Semi-Ever After. New York: Henry Holt and Company, 2017.

The work begins with the narrator, Heather, remembering the soft beginnings of her relationship with her children's father, Brian. She is pregnant and alone, having returned to her family in California after Brian tells her he does not want to be a father. Although the pair attempt therapy and other methods to stay together, the unchangeable truth that Brian does not want to raise a family. Heather returns to California and reconnects with friends from college who help her feel a semblance of normalcy throughout the pregnancy. When Heather's baby, Gracie, is born, she is gravely ill, so Heather sets down the long and windy path searching for a cure. She begins to hear from Brian and miss his presence in her life, although it is tinged with resentment that he left her alone.

Brian begins flitting back into Heather's life once he realizes how sick his daughter is, expressing a desire to visit California infrequently and once again become a fixture in Heather's life. As he does so, the pair grow back together, however tenuously, and eventually Heather finds herself pregnant again. Although they are planning to have another baby, their relationship is still ill-defined and Heather worries that any large changes could disrupt their newfound happiness. By then, Brian has moved to California and is extremely dedicated to Gracie's health and that of he and Heather's new baby.

When Gabriel is born healthy, they harvest his cord cells, a possible last effort to save Gracie's life. Additionally, the pair moves to New York to begin a more permanent life. Heather agonizes over the decision to move because she finally feels rooted in California. She also worries that she and Brian’s relationship will fall apart when they return back East.

When the family begins seeing a new doctor in North Carolina, they split their time between there and New York City, and Gracie is committed to the hospital to await a transplant. The long medical process wears on the entire family, though least so on Gracie who shines as a beacon of hope and strength. She must wait at least one hundred days to receive the transplant wherein her body is prepared for the procedure. This process involves her losing her hair, growing weaker, and a significant difficulty for Heather and Brian to witness. Their own romantic relationship takes a backseat to their children, especially as Brian moves back and forth between North Carolina and New York City as he returns to teaching at university.

In the end, Gracie's transplant is successful, and Brian and Heather marry, cementing their years of growing back together to provide a home for their children. The story focuses on a family’s journey through several stages of life, culminating in a work that touches on both the beautiful, hopeful aspects of life, as well as the most trying.

More summaries and resources for teaching or studying Happiness: A Memoir.