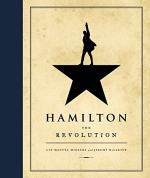 Jeremy McCarter and Lin-Manuel Miranda
This Study Guide consists of approximately 44 pages of chapter summaries, quotes, character analysis, themes, and more - everything you need to sharpen your knowledge of Hamilton.

This detailed literature summary also contains Topics for Discussion on Hamilton: The Revolution by Jeremy McCarter and Lin-Manuel Miranda.

“Hamilton: The Revolution,” by Lin-Manuel Miranda and Jeremy McCarter. First Edition; Published April 12, 2016 by Grand Central Publishing. The book alternates non-fiction, critical and analytical essays by McCarter with transcriptions of the show’s dialogue / lyrics as written (and commented upon) by Miranda.

The book begins with an introduction by its primary author, theatre artist (and former drama critic) Jeremy McCarter: the author / composer of “Hamilton,” Lin-Manuel Miranda, contributes secondary commentary, primarily in the form of short song-by-song notes. Miranda is also quoted several times in McCarter’s essays, which are alternated with scene-by-scene excerpts from the show.

In the first few essays, McCarter comments on the origins of the musical, and on the development of initial relationships between its creator, Lin-Manuel Miranda, and several of his collaborators, including producer Jeffrey Seller; director Tommy Kall; and historian Ron Chernow (who wrote the biography of founding father Alexander Hamilton upon which the musical is based). McCarter also discusses how all three, along with other contributors to the project (both financial and artistic), became increasingly excited about the use of rap as the primary narrative vocabulary, and how they kept finding resonances between the experiences of Hamilton (in the past) and the experiences of other immigrants (in the present). McCarter also describes how, as more of the piece developed, they became engaged in the idea of casting non-Caucasian actors as historically Caucasian characters. Meanwhile, in the show excerpts, Hamilton’s primary relationships (i.e. with primary antagonist Aaron Burr, and with his wife Eliza) are introduced, as is the basic situation: Hamilton is one of several leaders of the American Revolution against British rule.

Over the next few essays, as he narrates the process by which Miranda’s ideas for the show developed, McCarter also writes about the contributions of other artists to the piece: choreographer Andy Blankenbuehler; designers David Korins and Paul Tazewell; and orchestrator Alex Lacamoire. McCarter also refers to several actors whose characterizations and interpretations contributed to the show and the development of both its narrative and production style. In the excerpts from the show, the Revolution gains momentum, and Hamilton’s relationship with mentor and ally George Washington deepens at the same time as his relationship with rival Aaron Burr deteriorates. Meanwhile, his relationships with the sensitive Eliza and her clever sister Angelica also intensify. Throughout all the essays, but particularly in this section, there are references to how Miranda, while determined to be as historically accurate as possible, also found it necessary, at times, to reshape history in order to make a more effective and/or engaging dramatic narrative.

As he describes how the piece became more complete and eventually moved into production, McCarter describes the intensity, depth, and trust of the various collaborative relationships that supported the project, including that Miranda shared with Oskar Eustis, the head of the Public Theatre where the show was first presented. Then, as he describes the process by which the show moved from the Public to Broadway, McCarter draws connections between “Hamilton” and another landmark Broadway musical, “A Chorus Line.” Meanwhile, the excerpts from the show dramatize the outcome of the American Revolution, and Hamilton’s successes and mistakes, both personal and professional, in its aftermath.

In the book’s final essays, which are juxtaposed with the text of the show’s final moments (in which Hamilton is killed in a duel with Aaron Burr), McCarter describes the impact and importance of a visit by one of the show’s most fervent, and influential supporters: the sitting U.S. President, Barack Obama.

More summaries and resources for teaching or studying Hamilton: The Revolution.