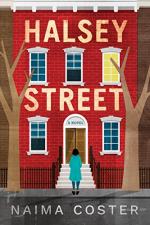 Related Topics
What's Mine and Yours

Naima Coster
This Study Guide consists of approximately 49 pages of chapter summaries, quotes, character analysis, themes, and more - everything you need to sharpen your knowledge of Halsey Street.

The following version of this book was used to create the guide: Coster, Naima. Halsey Street. Little A, 2018.

Coster’s novel, written in the third person, describes the lives of the Grands, a family that once lived together on Halsey Street in Brooklyn. With Penelope’s move to Pittsburgh and her mother Mirella’s move to the Dominican Republic, the family is separated with only Ralph remaining in the house.

The novel starts with Penelope’s life in Pittsburgh, sitting in a bar by herself, celebrating her father’s birthday. She spends the night talking to a guy she meets there and takes him home. She is woken by a call telling her that her father, Ralph, had fallen. Although he only has a cut, Penelope recalls his previous, more severe accident and decides to return back to Brooklyn to be closer to her father.

Penelope moves in to an attic room in a nearby street, deciding against moving back home. She rents the room from the Harpers, a young white family from California. Penelope notices the changes to the gentrifying neighborhood and sees the organic store that has replaced her father’s record store. She gets a job teaching art at the school she went to as a child and also notices the changes there, with many white children now attending.

Mirella, now in a house in the Dominican Republic that she had bought with her savings, writes a postcard to Penelope telling her she wanted to try and fix their relationship. One night, Penelope receives a call from Miss Beckett, her father’s friend and neighbor. She tells Penelope he is missing and that he had been upset after receiving a postcard from her mother, Mirella. Penelope finds him drunk at the local bar and he gives her the postcard addressed to her. Penelope does not read it, but rather spends the night having sex with the husband, Marcus, from the family she rents her attic from.

Penelope fights with Ralph on Christmas Day and avoids him. The Harpers ask her to move out after she takes Grace, their child, out on an adventure without their permission. After her dad has a big fall, they allow her more time to move out. Ralph is placed in a home as he is now wheelchair bound.

Penelope goes to the Dominican Republic to get Mirella to sign over Halsey street to her. Ralph has already signed over the deed from his side. Mirella is happy that her daughter has come to see her and takes a while to sign the deed so that Penelope is forced to spend more time with her. Penelope notices that Mirella has changed but Penelope is still unable to be affectionate towards her.

Penelope returns back to Brooklyn and moves into Halsey Street. She receives a letter from Mirella dated the day she had left the Dominican Republic. She longs to talk to her mother and is excited when the phone rings, believing it to be her. Instead, it is news that Mirella had died while crossing the road. In shock, Penelope is unsure how to process what has happened. The next day she tells Ralph and he is devastated, insisting they both make the trip to the Dominican Republic to hold a funeral for her. She initially refuses, telling Ralph it was pointless. She relents, however and paints a picture of Mirella’s garden, planning to hang it in the house she had bought in the Dominican Republic.

More summaries and resources for teaching or studying Halsey Street.