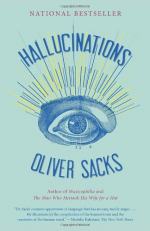 Oliver Sacks
This Study Guide consists of approximately 29 pages of chapter summaries, quotes, character analysis, themes, and more - everything you need to sharpen your knowledge of Hallucinations.

Hallucinations, by Oliver Stacks, is an extraordinary look at the causes and circumstances surrounding one of the most controversial symptoms in today's neurological field. Sacks examines a variety of reasons normal, everyday citizens might have hallucinations, and helps to remove the stigma often associated with these. His book is informative and technical, while giving enough real world context and examples to make it enjoyable for most readers.

As a technical piece, this book is filled with ample explanations of research studies and technical neurological explanations for the various hallucinations presented, but more importantly, Sacks writes with both personal experience and experience as the doctor of many patients, giving this book an entertainment value to coincide with its instructional value. It is an entertaining, enlightening, and engaging look into the science of hallucinations.

More summaries and resources for teaching or studying Hallucinations.