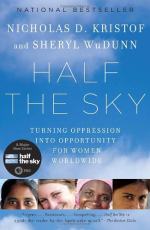 Summary
+Chapters Summary and Analysis
Chapter 1: Emancipating Twenty-First-Century Slaves
Chapter 2: Prohibition and Prostitution
Chapter 3: Learning to Speak Up
Chapter 4: Rule by Rape
Chapter 5: The Shame of “Honor”
Chapter 6: Maternal Mortality
Chapter 7: Why Do Women Die in Childbirth
Chapter 8: Family Planning and the “God Gulf”
Chapter 9: Is Islam Misogynistic?
Chapter 10: Investing in Education
Chapter 11: The Financial Revolution
Chapter 12: The Axis of Equality
Chapter 13: Grassroots vs. Treetops
Chapter 14: What You Can Do
Important People
Objects/Places
Themes
Styles
Quotes
Topics for Discussion
Order our Half the Sky Study Guide

Half the Sky Summary & Study Guide

Nicholas D. Kristof and Sheryl WuDunn
This Study Guide consists of approximately 51 pages of chapter summaries, quotes, character analysis, themes, and more - everything you need to sharpen your knowledge of Half the Sky.

Half the Sky Summary & Study Guide includes comprehensive information and analysis to help you understand the book. This study guide contains the following sections:

This detailed literature summary also contains Topics for Discussion on Half the Sky by Nicholas D. Kristof and Sheryl WuDunn.

Nicholas Kristof and Sheryl WuDunn are partners in life and partners in their quest to make a difference for women in remote and impoverished regions of the world. Women and girls are mistreated, abused, routinely raped, mutilated, sold and trafficked, forced into prostitution and unable to attend school. Kristof and WuDunn have traveled the globe for many years seeking out these abused women in hopes of gaining a better understanding of them and their culture and gently planting the seed that there can be more in life for them. In an era in which mankind has made incredible advancements in science and technology, there is a world of women in developing countries who modernity has not touched. Many are modern-day slaves who are bought and sold and abused and even murdered if they cross a line drawn in the sand by the men who rule them as their masters.

Celebrated journalists Kristof and WuDunn have devoted literally years of their lives trying to help these people on both a personal level and by shining a light on their plight so that others who can help are made aware of the unimaginable existence that these women in remote areas of Africa, Asia, Pakistan, India and the Middle East are compelled to accept these women's situations as reality. Rape is used as a punishment for women who disobey the laws laid down by the village men or by husbands. The men, therefore, blame the women for being raped because it is their disobedience that caused the act. So many women in developing nations have been cowed and intimidated by men their entire lives and are taught when they are little girls by their mothers that the men are in charge with no questions asked. Mass rape has been used as a military strategy as a way of intimidating villagers and striking fear into the women.

The authors discuss other horrors that these women are subjected to including genital mutilation which is a rite of passage for young girls to keep them from enjoying sex and, therefore, intended to keep them from being promiscuous. There are honor killings in the Middle East and India; when a girl is interested in the wrong boy it is considered preferable to kill her than for the family to be shamed. There is bride burning in parts of Asia which occurs when a bride is exposed to have had sex before marriage. Such an exposure leads to the burning of the girl. The health care is so poor it is almost non-existent in these remote backward areas. When there are health care facilities, they serve men first and leave women for last. Many women die giving birth because there are no gynecologists and no facilities for women to turn to. There are complications from births that are unheard of in first world countries.

Kristof and WuDunn describe the many ways that people have already helped these women and the charitable organizations that have save lives and help to educate them. However, the authors stress, there is a long way to go. Kristof and WuDunn bring their book to a close providing ways that the ordinary person can help bring relief to those whose suffering seems endless.

More summaries and resources for teaching or studying Half the Sky.

Half the Sky from BookRags. (c)2022 BookRags, Inc. All rights reserved.