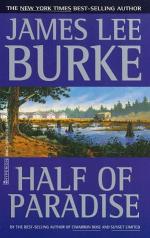 Half of Paradise Summary & Study Guide

Half of Paradise Summary & Study Guide includes comprehensive information and analysis to help you understand the book. This study guide contains the following sections:

This detailed literature summary also contains Topics for Discussion and a Free Quiz on Half of Paradise by James Lee Burke.

Half of Paradise is the first book written by twenty-something James Lee Burke. Burke would go on to become a prolific novelist.

The book is focused on the lives of three men: Avery Broussard, J.P. Winfield, and Toussaint Boudreaux. The men have little in common except that their actions and circumstances take them to places heretofore unknown. None fares well in the end.

Avery Broussard is the first character mentioned in the book and one of the three main subjects in the book. The book begins with a relatively young Broussard returning home from a six month stint on the oil rigs. Broussard had left the farm in rural Louisiana to see a bit of the world. For six months, Broussard worked on the rigs on the Gulf Coast, but now the job was done. Broussard takes up where he left off on the family farm, doing his best to save the last remaining piece of the once admirable sugarcane plantation. After Broussard's father dies, it seems that the family legacy also dies. Eventually, Broussard loses the farm.

Broussard is an alcoholic that does not always make the best judgments. One night while sitting with an old moonshiner, things go awry and Broussard is arrested for running moonshine. Broussard is sentenced to one to three years in a work camp. Broussard meets up with one of the others arrested that night, a crazy war veteran named LeBlanc. LeBlanc is combative and filled with rage, eager to lash out at anyone.

After a year, Broussard is released from jail. He goes to New Orleans, finds a job and rekindles an old romance. One night Broussard is arrested for a number of crimes involving alcohol and is sent back to the work camp.

The second character mentioned in the book is J.P. Winfield.

J.P Winfield is an overnight success. After winning a rigged audition, Winfield is hired by Virdo Hunnicut. He begins playing in every club, hall and juke joint throughout the southern states. The road and hectic are taking its toll on Winfield and it is obvious that he is suffering from exhaustion. One night April, a girl with questionable moral fiber summons Winfield. April offers Winfield an introduction to Doc Elgin, a man that would be able to help Winfield with his problems. Winfield takes the Benzedrine offered by Elgin and quickly gives in to April's proposition.

Winfield's life is a whirlwind from the moment on. First Winfield learns that he will be the new sponsor for Live-Again, a new vitamin tonic water. Winfield will also travel with Jim Lathrop, a politician vying for a spot in the Senate. As Winfield's career takes off, he becomes addicted to drugs. Winfield becomes more famous; the drugs take a stronger hold.

Eventually, Winfield finds himself married to April, strung out most of the time, and seems to be throwing his career down the toilet. The end comes for Winfield when he has a drug-induced heart attack on the street. Winfield dies alone in the hospital.

The third and final character in the book is Toussaint Boudreaux.

Toussaint Boudreaux is an African American longshoreman with a gift for fighting. At thirty years old, Boudreaux has little time left to prove himself in the ring and make his name in the big time before his career is over.

In a time when it was not entirely common for blacks and whites to work together, Boudreaux forged a place for himself among the other longshoremen. It is not the ideal job for Boudreaux, but moving to New Orleans from a small town meant that one had to take whatever work was available.

Beside Boudreaux is his trainer, Archie. Boudreaux sees his chances fading after he breaks his hand in the ring, jeopardizing his chances for the big time. The future looks even bleaker when Boudreaux is imprisoned for a crime he did not commit.

Boudreaux is sentenced for the crime and will serve up to fifteen years in work camp. The book details Boudreaux's daily life in the camp until the day he escapes. Boudreaux is killed while attempting to return home to Barataria.

Half of Paradise from BookRags. (c)2022 BookRags, Inc. All rights reserved.