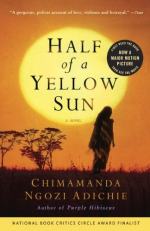 Related Topics
Americanah
The Thing Around Your Neck
We Should All Be Feminists
Dear Ijeawele, or A Feminist Manifesto in Fifteen Suggestions
Zikora: A Short Story
Apollo
The Arrangements
A Private Experience
Notes on Grief

Half of a Yellow Sun Summary & Study Guide

Half of a Yellow Sun Summary & Study Guide Description

Half of a Yellow Sun Summary & Study Guide includes comprehensive information and analysis to help you understand the book. This study guide contains the following sections:

This detailed literature summary also contains Quotes and a Free Quiz on Half of a Yellow Sun by Chimamanda Ngozi Adichie.

"Half of a Yellow Sun" by Chimamanda Ngozi Adichie, features Nigeria during the 1960s and the struggle of the people trying to come to terms with a dual nature and culture. The book opens by focusing on a young 13-year-old Igbo boy named, Ugwu. He is going to work in the city at a rich professor's home. The professor's name is Odenigbo. The boy's aunt walks him to the residence and sends him in, alone. Ugwu soon settles in and is almost treated as if he is family by Odenigbo and his fiance, Olanna. Olanna is the daughter of a businessman in Lagos, and also has a background of extreme wealth. She has only just returned from London where she has been obtaining a degree is sociology.

The reader is introduced to a wide range of characters who parade past Ugwu his first few months there. Each weekend there is a political meeting in the den where Odenigbo entertains dissidents and fellow radicals who are unhappy about the English colonization of their country. Richard Churchill is the only white Englishman in Odenigbo's circle of friends. He is involved with Kainene the brusque younger sister to Olanna. His former girlfriend, Susan, a snobbish Englishwoman, berates Richard for his choice in women. Richard doesn't see it that way. The reader sees that Richard is in love with the country and identifies with it, though he understands that he might always remain an outsider. The reader also meets Odenigbo's mother, whom everyone calls "Mama." She disapproves of Olanna because Olanna's mother didn't breastfeed her, and thus insinuates that Olanna is a witch. This upsets Olanna very much, but once Mama leaves, her love for Odenigbo overrides her disappointment. They begin trying to have a child. The reader also meets Olanna's former boyfriend, Mohammed, a wealthy Hausa, and Olanna's Aunt and Uncle who live in Kano.

Several years later, in the midst of a governmental overthrow of the Nigerian government, there is great civil unrest. The two dominant tribes, the Hausa and the Igbo both accuse one another of instigating the overthrow. Both are pointing fingers at the other. Olanna and Odenigbo have had a child, whom they simply call "baby." The violence escalates and moves towards a purge of all Igbo living in the area. Olanna's beloved Aunt and Uncle are murdered while she is visiting them with the baby due to this escalation. She just manages to escape onto a train. When she reaches Nsukka the violence has reached there too and she sees a woman carrying the severed head of her dead child in a basket. Once in safety Olanna learns from Richard that there were massacres that took place at the airport that morning. The area still held by the Igbo people declares its independence, calling this area the Republic of Biafra.

Nigeria reacts badly to this declaration and vow to never allow the succession. England and Russia immediately send arms to the Hausa held Nigerian government and the violence becomes commonplace. Fearing for their safety Olanna, Odenigbo, Ugwu, and baby move to the outer lying areas where there are food shortages and neither Olanna nor Odenigbo have access to their money. Olanna and Odenigbo decide to make their union official and have a quick wedding, which is cut short by a bombing at the reception.

The reader will often have the linear plot line interrupted by the inclusion of sections from a book titled, 'The World Was Silent When We Died.' These selections are placed in ostensibly to show what is also going on globally at the same time as the Biafran War. After this first selection, the reader is returned to the ongoing story, but it takes place at a time before the war. In a flashback the reader sees Olanna as she is leaving Odenigbo's home to go back to London to finish up her last year of schooling. Mama, Odenigbo's mother, plots to break them up by having her serving girl, Amala seduce Odenigbo. She is successful and Odenigbo sleeps with her. Olanna finds out about it and moves all of her things out. Later, Olanna finds out that Amala has borne Odenigbo's child. In her grief Olanna gets drunk and seduces Richard, who sleeps with her. In the morning they realize their mistake and make a bargain not to tell Kainene. However, Olanna does tell Odenigbo.

Odenigbo realizes his mistake and he and Olanna get back together. Together they adopt Amala's child, whose real name is Chiamaka, but her nickname is Baby. In the meanwhile, Kainene finds out about Richard and Olanna's indiscretion and is so furious that she burns Richard's book manuscript. They make up afterwards and stay together.

In the present day, war-torn Biafra is in a tailspin and the rebellion is going badly. People are starving and the level of violence is nightmarish. Nigeria has instituted a siege of the major cities and isn't allowing food, medicine, or supplies into any of the cities. When Olanna asks Richard why the global community is not helping them, Richard can offer no excuse. Richard tries to do his part by writing news articles that are immediately picked up by the international community. Kainene starts a refugee camp and Olanna assists her. Odenigbo's mental state is not good. His mother has been killed in the violence and unable to deal with the grief and the likely loss of the war, he begins drinking and slides into a deep depression.

Kainene and Olanna make amends and they are able to resume their former close relationship. Ugwu, now 16, falls in love with a girl, but before he can go much further with her he is drafted into the Biafran army. The reader watches as a brilliant, sensitive, gifted young man is turned into a killing machine. The ultimate turning point for him is when he willingly participates in the gang rape of a girl from a bar one night. Later, he is wounded in battle and everyone fears that he is dead.

Olanna's family can no longer stay in Lagos and move in with Kainene and Olanna. While visiting friends in the hospital Olanna and Kainene find Ugwu. They take him home. Children begin dying of starvation in the refugee camps and Kainene vows to do something. Olanna is worried that her sister will do something foolish. Unbeknownst to her family, Kainene steals out at night to cross enemy lines to see if she can find food for the children. She is never seen again, though Richard and the others frantically search for her.

Starving and disease-ridden, the Biafran resistance gives up and Nigeria is unified once more. Olanna's family return to their mansion only to find everything nearly destroyed. All of their savings in the banks have been confiscated, and they are devastated. Ugwu, now well, returns to his village to see what is left of it. It is here that he learns the devastating news that his sister had been gang raped by some soldiers. As a way to cope with the news and the violence he has lived through, he begins to write a book, which he titles: "The World Was Silent When We Died."

Half of a Yellow Sun from BookRags. (c)2022 BookRags, Inc. All rights reserved.