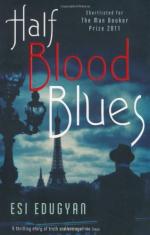 This detailed literature summary also contains Topics for Discussion on Half Blood Blues by Esi Edugyan.

Half-Blood Blues is a novel by author Esi Edugyan. The story follows the main character, Sidney Griffiths, as he recounts his experiences while touring through Europe as a jazz musician prior to the Great War. During Sid's time in Berlin and Paris, he meets one of the greatest trumpet players in history, Hiero Falk.

Sid portrays himself as Hiero's friend and protector. When something comes between the two young musician, Sid ends up betraying Hiero Falk. Sid hides Hiero's visas, which can allow Hiero to escape the Nazis and so Hiero ends up being captured by the Nazis.

As the novel unfolds, Sid finds out that his oldest friend, Chip Jones, has been receiving letters from Hiero Falk, whom Sid and Chip thought was dead. Hiero goes by Thomas now and requests that Chip come to visit him where he lives in Poland. While Chip and Sid are returning to Europe, Sid is narrating the story of what happened between him and Hiero.

Ultimately, it is a woman, Delilah Brown, that comes between the two young men. While Hiero makes some moves that spurs a competition between the two men, Sid invokes the ultimate betrayal by essentially turning Hiero over to the Nazis, where Hiero ends up in a concentration camp.

In this coming of age story, Sid has to deal with the guilt of felling responsible for the betrayal and murder of his friend. When Sid is able to admit his wrongdoing, he also is able to come to terms with his mistakes when he is forgiven.