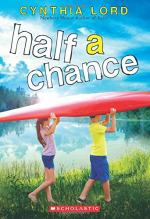 Half a Chance: A Novel Summary & Study Guide

Cynthia Lord
This Study Guide consists of approximately 31 pages of chapter summaries, quotes, character analysis, themes, and more - everything you need to sharpen your knowledge of Half a Chance.

Half a Chance: A Novel Summary & Study Guide Description

Half a Chance: A Novel Summary & Study Guide includes comprehensive information and analysis to help you understand the book. This study guide contains the following sections:

This detailed literature summary also contains Quotes and a Free Quiz on Half a Chance: A Novel by Cynthia Lord.

NOTE: The following version of this book was used to create this study guide: Lord, Cynthia. Half a Chance. Scholastic. 2014.

Half a Chance is a children’s novel by Cynthia Lord in which 12-year-old aspiring photographer Lucy befriends 12-year old Nate whose grandmother is slowly slipping into dementia. When the novel begins, Lucy, Mom, Dad, and their dog, Ansel, have just moved into a New Hampshire lake cottage near the town of North Conway. Dad is a famous photographer who is set to head out on yet another trip, and will be the judge for a photo scavenger hunt competition upon his return. Lucy is sad to see him go. However, she quickly befriends the boy at the cottage next door, Nate. Nate and his family – including older sister Emily and Grandma Lilah – are from New Jersey and are only up to the lake for the summer.

Nate reveals that the island in the lake is a nesting place for loons, which are endangered birds in New Hampshire. Grandma Lilah is in charge of the local chapter of the Loon Preservation Committee. Each day, Nate and Emily go to the island to see how the loons are getting along, and to see if any new loons have been born because Grandma is no longer capable of making the trip over. Lucy is invited along, and she decides she will try to win the photography contest so that the prize money can be used to rent a boat to bring Grandma over to the island to see the loons again. As the summer unfolds, Lucy and Nate spend a lot of their time together, with Nate helping Lucy in her quest to win the contest. Meanwhile, Lucy comes to learn more about Grandma Lilah’s dementia, which causes her to become very confused for brief periods of time.

The money from the contest allows Mom and Dad to rent a pontoon boat, which they, Lucy, and Nate’s whole family use to bring Grandma Lilah to the island of the loons. Grandma is thrilled with the trip, and thrilled to be able to see all the loons on the island. As the summer comes to a close, Nate’s family prepares to return to New Jersey. Lucy is very sad to see them go. She and Nate text to keep in touch, and look forward to an autumn visit. In the autumn, Lucy watches as the last loon flies south for the winter.

More summaries and resources for teaching or studying Half a Chance: A Novel.

Half a Chance: A Novel from BookRags. (c)2022 BookRags, Inc. All rights reserved.