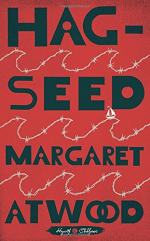 Margaret Atwood
This Study Guide consists of approximately 40 pages of chapter summaries, quotes, character analysis, themes, and more - everything you need to sharpen your knowledge of Hag-Seed.

This detailed literature summary also contains Quotes and a Free Quiz on Hag-Seed by Margaret Atwood.

Hag-Seed tells the story of Felix, a theatre director ousted from his job at a Canadian theatre festival, who begins teaching Shakespeare at a prison and plots his revenge against the men who betrayed him while staging a production of The Tempest.

Part I – “Dark Backward” – explains Felix’s backstory. His wife Nadia died in childbirth and his daughter Miranda died of complications from meningitis when she was three years old. After these events, Felix became obsessed with staging an outlandish production of The Tempest in which he would play the protagonist Prospero, who also has a daughter named Miranda. Unbeknownst to Felix, his assistant Tony was plotting to take over his job by slowly taking on more of the administrative and financial aspects of the role, as Felix became more and more preoccupied with The Tempest.

One day Tony informed Felix that the board had decided to replace Felix with Tony as artistic director and that they would be cancelling his production of The Tempest. Felix moved to an isolated rural house and began to plot his revenge. He imagined that his daughter Miranda was still alive and had conversations with her when he was alone. Fearing he was becoming too isolated, Felix took a job teaching Shakespeare in a prison.

In Part II – “A Brave Kingdom” – Felix has successfully staged three plays with the Fletcher Correctional Players in the prison. His boss informs him that some politicians, including Tony, will be viewing this year’s production in order to decide whether the program should continue. Felix announces he intends to stage The Tempest for this year’s production. Felix hires an actress named Anne-Marie to play the part of Miranda and assigns the rest of the characters to the students in the prison. Felix will play Prospero.

In Part III – “These Our Actors” – the cast rehearse the play and Felix comes up with a plan to get his revenge against Tony when he attends the performance. In Part IV – “Rough Magic” – Felix and the cast prepare for the production. The politicians, including Tony, arrive at the prison. Instead of a screening of a pre-recorded performance of The Tempest they are subjected to an immersive theatrical experience in which the cast (under Felix’s direction) stage a phony prison riot, making the men fear for their lives, while they also continue to perform extracts from The Tempest. Felix catches Tony on camera suggesting that he and another man should murder one of the other politicians and blame it on the prison riot. Felix uses this as leverage to blackmail Tony, get his job back as Artistic Director of the theatre festival, and secure future funding for the Fletcher Correctional Players.

In Part V - “This Thing of Darkness” – the cast celebrate their success at saving the program and give their final reports about The Tempest. In the Epilogue, Felix has his job back at the theatre festival and is making plans to go on a cruise where he will give lectures about the Fletcher Correctional Players. Felix finally lets go of the ghost of his daughter Miranda.

More summaries and resources for teaching or studying Hag-Seed.