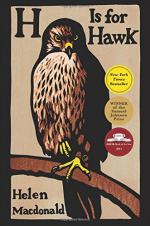 H is for Hawk Summary & Study Guide includes comprehensive information and analysis to help you understand the book. This study guide contains the following sections:

This detailed literature summary also contains Quotes and a Free Quiz on H is for Hawk by Helen Macdonald.

H is for Hawk by Helen McDonald is a novel that speaks to the need to develop one's own mechanisms for coping with life's ups and downs. The story opens with the protagonist, Helen talking about her love for birds. Helen has been a falconer for several years, and has recently become interested in a specific type of bird of prey, the Goshawk. Goshawks are notoriously hard to train because they are considered to be one of the most savage birds. Helen returns home one day after watching Goshawks in the woods to hear the shocking news that her father has passed away. Helen was incredibly close to her father and considered him a legend, so the news devastates her.

Part of her grieving involves getting a Goshawk of her own named Mabel. Helen pours her time into training and taming Mabel. It takes some time, but Helen is able to tame Mabel so they’re comfortable around one another, but she hasn’t taken her out hunting yet. Helen is hesitant about taking Mabel hunting because that means having to let her fly free, and she doesn’t know if Mabel will return to her. With the help of her friend Christina and Stuart she is able to let Mabel fly freely without risking her flying away.

While things are going well with Mabel, Helen is having trouble with the rest of her life. She no longer feels comfortable around people. Her father’s death causes her to have nightmares, and all she wants to do is retreat into the wild and live like a solitary creature, just like a hawk. She loses her job at the university and will soon be losing her home as well. While this is going on, she finds herself struggling to communicate with people, something which poses a big problem since she has to write a speech for her father’s memorial service.

Throughout the book, Helen refers to many different writers. One of them is T.H White. White was a notorious failure in the bird community, and his book is considered to be very amateurish. He ended up losing his bird, nicknamed Gos, because he didn’t take care of him correctly. While reading his books, Helen learns about the journey that White went through. The two end up sharing many similarities, trying to use their birds as a way to escape their fear and retreat into the wilds.

Through her hunting with Mabel, Helen is able to confront some of her fears. She writes a touching memorial for her father and realizes that she has family and friends that care about her. Things take a turn for the worse when Helen almost loses Mabel during a hunt. She realizes that just like White, she hasn’t been doing a good job of taking care of her bird and has been projecting her own issues onto Mabel.

Helen realizes that she needs help and starts to see a therapist. That winter, Helen and her family go to visit friends in America. They help take care of Helen and she ends up having an amazing time, even though she was separated from Mabel and not hiding away in the wilds. When Helen returns home, she thanks all of her friends that have been supporting her and starts looking for a new job and a place to live. Helen still misses her father, but she knows that she has to go on living her life and just can’t run away from her problems.

H is for Hawk from BookRags. (c)2022 BookRags, Inc. All rights reserved.