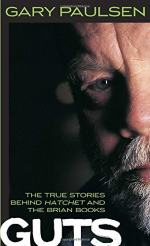 Gary Paulsen
This Study Guide consists of approximately 21 pages of chapter summaries, quotes, character analysis, themes, and more - everything you need to sharpen your knowledge of Guts.

Guts: The True Stories behind Hatchet and the Brian Books is a nonfiction, memoir-like account by Gary Paulsen regarding events from his own life that he worked into his Brian Robeson novels. Paulsen divides his novel into seven chapters, including a Foreword and a section on basic, primitive survival skills. The five chapters between recount the experiences from Paulsen’s own life that have to do with the inspiration for his Brian books.

Jumping back and forth through different times in his past, Paulsen reveals that he not only served in the military, but volunteered for ambulance services, flew in small planes, raced the Iditarod numerous times, and had countless hunting experiences and mishaps. The majority of these experiences occurred in northern Minnesota, Canada, and the Alaskan wildernesses. Paulsen is straightforward and honest about his experiences, holding nothing back from readers so that readers can understand he has written from life. Paulsen explains he did not allow Brian to do or experience anything Paulsen himself did not do or experience. Paulsen explains that this is because he wants to get real knowledge across to readers through his writing, and not mere drama.

Paulsen moves systematically through Brian’s experiences in the quartet of books about him. When the plane in which Brian is traveling crashes after the pilot suffers a fatal heart attack, Paulsen draws on several experiences of his own. Paulsen, while working as an ambulance volunteer, responded to many heart attack cases. One in particular involved a man named Harvey and included Harvey looking Paulsen straight in the eyes as Paulsen attempted to save his life. The pilot in Hatchet would come to look at Brian with those same eyes. The crash of the plane itself was drawn from Paulsen’s experiences seeing the aftermaths of airplane crashes, and from once witnessing an actual plane go down while on a ship.

Paulsen’s illustrations of Brian surviving in the wilderness also draw wholly on Paulsen’s own experiences. For example, becoming attuned to sounds and learning to hunt with a bow and arrow were things Pauslen mastered as a child and a teenager. Things Brian does, such as building campfires, skinning kills, cooking meat, boiling water for consumption, and so on, are all things Paulsen had to learn to do in his own life in years past. Other experiences, such as when Brian is suddenly attacked by a moose, are things that also happened to Paulsen. Paulsen, while running a race with his dogs, was swept off his sled by a rampaging moose, after which he was stomped on repeatedly until the moose believed him to be dead.

In other situations, Paulsen committed to doing things he had never done before in order to make sure that Brian could do them in the novels. For example, when Brian starts a fire using sparks from a hatchet against a rock, Paulsen himself ensured such a fire could be started. When Brian eats turtle eggs raw in the novel, Pauslen himself ate turtle eggs raw in real life. When Brian has to eat the guts of animals to survive, Paulsen himself did the exact same thing in his own life. As Paulsen explains through Guts, if one wishes to survive, one cannot be squeamish.

More summaries and resources for teaching or studying Guts.