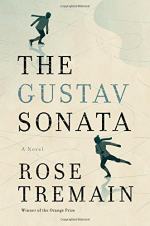 The following version of this book was used to create this study guide: Tremain, Rose. The Gustav Sonata. London: Vinatage, 2017. Kindle AZW file.

The Gustav Sonata explores the damaging results of Swiss neutrality during World War Two by exploring its impact on the life of Gustav Perle, a young boy born growing up in Matzlingen, Switzerland during the aftermath of the war. The novel follows Gustav into adulthood as his difficult relationships with his mother Emilie and best friend Anton force Gustav to acknowledge his buried emotions.

Part 1 takes place between 1947 and 1951. Gustav grew up in a small flat with his mother Emilie who told him that his late father had been a hero during the war who had saved the lived of Jewish refugees. Emilie instructed Gustav that he must become the master of his emotions. A new boy, Anton, started at Gustav’s school and they became close friends after Gustav soothed Anton’s crying. Emilie disapproved of their friendship because Anton’s family were Jewish and Emilie blamed Jewish people for the fate that befell her husband Erich, leaving her to live in poverty with Gustav.

Emilie fell ill and was hospitalized. In her absence, Gustav was sexually molested by a neighbor but kept this to himself rather than ask for any help. Anton began performing in piano recitals but his anxious nature made it impossible for him to play well. Anton’s family invited Gustav on a vacation to Davos with them, during which Anton and Gustav shared a kiss.

Part 2 takes place between 1937 and 1942. Emilie and Erich meet each other for the first time on Swiss National Day. Shortly afterwards, Emilie becomes pregnant and they get married. Erich is Assistant Chief of Police and is entitled to a large apartment on a prominent street as a result of his marriage. Erich becomes angry with Emilie over her lack of compassion over the difficulties of his job dealing with Jewish refugees, and her lack of interest in the events going on elsewhere in Europe. Erich pushes Emilie to the ground and she has a miscarriage. They slowly reconcile over several months.

Meanwhile, the Swiss government introduces an order stating that no more Jewish refugees will be admitted into Switzerland after a specific cutoff date. Erich feels unable to return the refugees he encounters to Germany, knowing that it will mean certain death. Instead, he begins to falsify the dates on official documents, allowing them to stay in Switzerland. Eventually, Erich is found out. He is fired from his job and ordered to vacate the apartment. When he tells Emilie the news, she leaves him and returns to Basel to live with her mother.

In Emilie’s absence, Erich begins a love affair with Lottie Erdman, the wife of his best friend and Chief of Police Roger Erdman. Erich moves into a small apartment and gets a job cleaning trams at night. Growing weary of her mother’s company and their poverty, Emilie decides to return to Erich. Emilie becomes pregnant again and Lottie tells Erich that they cannot continue their affair. Emilie gives birth to a baby boy who they name Gustav. Erich receives a letter from Lottie asking him to begin their affair again and he races to her apartment. Emilie is woken in the night by police officers telling her that Erich has been found dead in the street.

Part 3 takes place between 1992 and 2002. Gustav owned a hotel in Matzlingen and Anton worked as the head of music at a local school. A British veteran stayed at the hotel and encouraged Gustav to find out the truth about his father’s past and what had happened to him during the war. Gustav got in touch with Lottie Erdman who told him about the affair she had with Erich.

A music producer heard Anton playing at a school concert and invited him to move to Geneva to record an album. Gustav recalled the death of his mother Emilie some years beforehand. Gustav closed the hotel for the winter so that it could be refurbished and took Lottie on an extended vacation in Paris. Anton’s father passed away and he returned to Matzlingen for the funeral. Anton told Gustav that he was in a romantic relationship with Hans, his producer, and Gustav was so disturbed by the news that he vomited.

Anton’s mother got in touch with Gustav to tell him that Anton was in a psychiatric hospital in Geneva. Gustav visited him and Anton expressed a wish to return to Davos: the location where he and Gustav had kissed as boys. Gustav sold the hotel and moved to Davos to live with Anton as a couple.