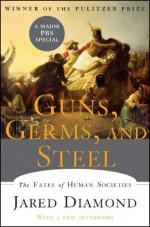 Guns, Germs, and Steel: The Fates of Human Societies Summary & Study Guide includes comprehensive information and analysis to help you understand the book. This study guide contains the following sections:

This detailed literature summary also contains Topics for Discussion and a Free Quiz on Guns, Germs, and Steel: The Fates of Human Societies by Jared Diamond.

Guns, Germs and Steel: The Fates of Human Societies attempts to explain why history progressed differently for peoples from various geographical regions. Diamond sums up his book with the following sentence, "History followed different courses for different peoples because of differences among peoples' environments, not because of biological differences among peoples themselves" (pg 25). Diamond argues that environmental factors, such as plant and animal domestication, gave some societies advantages over others, allowing them to conquer the disadvantaged societies.

In the first section of the book, Diamond takes the reader on a tour of human history. He discusses the evolution and spread of human beings, arguing that some peoples had a 'head start' over others because of the timing of human evolution. He examines how environments shaped human history through a brief examination of how societies on the Polynesian islands developed due to the differing environments and then by examining what happened as societies with more advantages encountered more disadvantaged societies in the Americas.

Diamond argues that there are several initial factors that influenced the different historical progression of societies. One of these factors was the rise of food production. The Fertile Crescent in Eurasia had a wide variety of wild plants that could be domesticated as well as a climate and environment that was suitable for agriculture. Eurasia also possessed a greater percentage of large mammals that could be domesticated. These animals were used to help provide meat, clothing, and muscle power for agriculture. In addition, the continent of Eurasia also lies on an east-west access, which Diamond argues helped the spread of crops and technologies. In other areas of the world, environments lacked enough wild plants that could be domesticated, had unsuitable climates, and did not possess big domesticated mammals. Additionally, the axes of these continents lay on a north-south line, which hindered the spread of crops and technology.

These initial causes, in turn, led to other differences in human history. Societies became sedentary when they do not have to scavenge for food. Sedentary societies typically increase in population rapidly. The combination of greater population density and domesticated animals led to the development of infectious diseases and resulting epidemics. Agriculture also led to economic specialization, allowing individuals within the society to devote time to developing more advanced technologies, including writing and weaponry. These denser populations also led to the need for centralized governments that could support and mobilize their citizens for wars.

In the final section of the book, Diamond applies his theory to different locations on the globe. He shows why, despite common ancestors, Australia and New Guinea developed differently in response to their environments. Some societies in both China and the Polynesian Islands that had skills, including the ability to grow crops and make weapons, conquered less fortunate peoples who had not developed these skills. The history of Eurasia also illustrates why Europe was able to conquer much of the Americas and Africa.