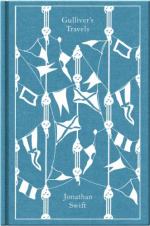 Gulliver almost dies several times while at the palace from birds, hail, and a friendly dog. The Queen knows he loves boats so she has a trough brought up with water and a tiny boat for him to sail in. One of the maids lets a frog accidentally get in and it almost kills Gulliver. The Queen becomes obsessed with his safety and makes sure he is never out of her sight. He becomes saddened by not being allowed to go for his walks, but is soon occupied by the maids of honor. The maids love having him come around and he describes them as nasty because he can see all their imperfections and they smell bad to him because there is just too much human.

The worst part to him is that the Maids do not view him as...