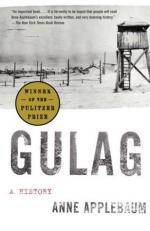 This detailed literature summary also contains Topics for Discussion and a Free Quiz on Gulag: A History by Anne Applebaum.

Gulag: A History is an account of the Soviet Russian Gulag labor camps during the twentieth century and discusses what life was like within the camps for prisoners. Applebaum makes extensive use of recently opened Gulag archives, memoirs, interviews, and other official documents to narrate this history.

The first section of the book describes the origins of the Gulag from the Bolshevik Revolution through the Great Terror of the late 1930's. During this time, forced labor camps were organized throughout the Soviet Union. These camps housed a wide variety of prisoners, from professional criminals to "kulaks" to "politicals." Leaders within the Soviet Union often used the camps as a way of eliminating political challengersboth real and perceivedand others who criticized the Soviet regimes. Prisoners were forced to participate in hard labor, often in large projects that were not well funded or thought out, including the White Sea Canal. In the 1930's, authorities began further expanding the camp system into the harsh climates of the far north, including the Komi and Kolyma regions. During the Great Terror0's, many politicals were arrested and sentenced to the camps. Mass executions, sometimes with victims chosen at random, were common.

The second section of the book describes life within the camps, from a prisoner's arrest to his daily life within. Although everyday life differed from one camp or prisoner to another, there are several shared aspects that most prisoners dealt with during their sentences. For example, one common experience was hunger within the camps. Rations were small, and many prisoners died from starvation or related illnesses. Another was extreme temperature; in the northern camps, prisoners often suffered the pervading cold during work and sleep with little or no heat. Finally, prisoners experienced forced labor in the camps. A prisoner's job often determined whether he or she would live or die. Other topics that Applebaum discusses in this section are the physical appearance of the camps, arrest procedure, interrogations, transportation to the camps, survival strategies, guards, and dying prisoners.

The final section discusses the decline of the camps until their elimination in the late 1980's and early 1990's. During World War II, the camps had expanded due to the influx of prisoners from occupied territories and foreign armies. During and immediately following the war, Stalin tightened his control over the Soviet Union, sentencing more individuals to the camps to serve the need for slave labor. Although Stalin persisted with the camps, it was becoming increasingly clear to other leaders that the camps were both problematic and unprofitable. After Stalin's death, the camps underwent a number of changes. While some subsequent leaders tried to improve conditions within the camps and release some prisoners, others tightened control over them. During the post-Stalinist period, a number of strikes and a few rebellions occurred, which helped bring about the end of the system. Finally, during the 1980's, Gorbachev issued a series of amnesties for most of the remaining prisoners and called for an examination of the history of the Gulag, which essentially shut the camp system down.