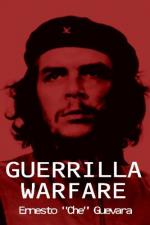 Che Guevara
This Study Guide consists of approximately 21 pages of chapter summaries, quotes, character analysis, themes, and more - everything you need to sharpen your knowledge of Guerrilla Warfare.

Armaments are the tools that the guerilla uses in fighting. In most cases this involves guns and knifes.

Strategy is composed of the global goals of armed conflict. For the guerilla, the end goal of strategy is complete victory and the overthrow of the current regime.

Tactics are the means of achieving the goals of strategy. Tactics involve actual battlefield techniques rather than the more general goals and guidelines of strategy.

The Garand is an American rifle that was popular in WWII and Korea and because of its simple components and reliable construction, popular among guerilla bands.

The Bazooka is a shoulder mounted rocket launcher, extremely effective as an anti-tank weapon.

A Sentinel is a guard often posted around the guerilla camp to notify sleeping troops of any kind of breach in the camp's perimeter.

A hammock is a simple...

More summaries and resources for teaching or studying Guerrilla Warfare.